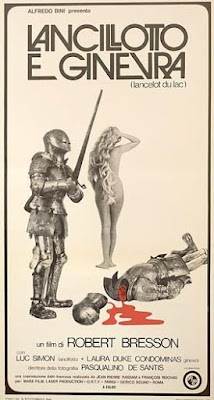 Lancelot drowns in a lake of desire, a heroic man reduced to an empty vassal filled with the dark waters of forbidden desire. Robert Bresson eschews the Arthurian Legend and shows us a bloody world of betrayal and selfish ideals: Arthur’s knights are just flesh and bone, full of extremist beliefs that justify their brutality, and beneath their metal exoskeleton they shed the same viscous blood as any mortal man.

The first shot of the film is a violent beheading as the Grail Knights make their way back to their King, murdering all who stand in the path of their Holy Quest. The bombastic soundtrack marches with the drums of war, as galloping horses shake the earth like a blitzkrieg and violent steel cleaves through steel. The opening narration imparts the fact that Percival, the only knight of pure heart, is lost and shall never return but those who do return are consumed by frailty and jealousy. Bresson’s minimalistic style utilizes no establishing shots: instead, he focuses upon the characters in medium close-up compositions, unconcerned with the exterior world but intent on examining the interior. Lancelot returns wearing black armor, a sign of his betrayal and adultery, and Guinevere is depicted as seductress to this liaison. Bresson films their trysts in a hayloft; much like a corrupt manger that symbolizes the birthplace of the savior in whom they pledge piety. Lancelot prays for guidance at the altar, and Bresson’s expert mise-en-scene shows the character in full battle regalia in perfect focus…while the cross remains blurred and indistinct, revealing his damaged faith.

Bresson’s style is to drain the narrative of grand emotion and noble soliloquy, devices too often used in the fantasy genre, and breathe life into the soft clay of the characters, to show them as nothing more than human beings. The film’s mystical rhythm of bland dialogue and clanking armor, of neighing horses and whispering winds, is uninterrupted by any score…save the drumbeats of defeat that bookend the film. Bresson films the tournament scene, where the anonymous white knight appears, in medium shot and from the knees down, so we never identify the rider on the horse. He then cuts to a different knight being thrown to the ground and then returns to the galloping cadence of the horse.

Finally, the knights turn against one another, and Lancelot must give up Guinevere, as Camelot divided cannot stand. Mordred attempts to usurp the throne and Lancelot, his sacrifice complete, returns once again to the side of his King. All lay dying in the forest, and Lancelot falls beside Arthur muttering the name of his one true love.