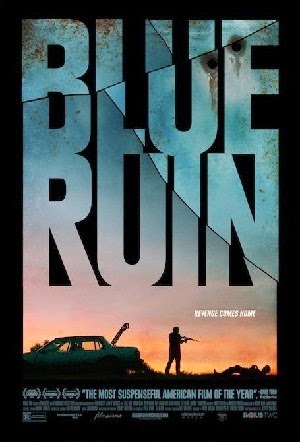 One man transposes retribution for justice in order to silence the demons that have driven him to the fringes of society. He learns that only Death is the great equalizer. Director Jeremy Saulnier strips the revenge motif down to its basic core concept, exploding genre motifs and allowing us insight into the protagonist’s slow descent into ruin.

The film begins with a disheveled man bathing in a tub: his beard and hair are tangled and unkempt. The bathroom looks perfectly nice middle class and the disparity seems a bit unsettling. It’s not until the scene cuts to a family coming home and the man jumping out of the tub and through the bathroom window that we realize he had broken in. This is how we meet Dwight. Saulnier lazily follows Dwight through his routine of sleeping in his rusted blue car by the beach, eating out of trash bins, and resting under the boardwalk. When a police cruiser stops by his parked car we expect him to be arrested for Trespass but Saulnier has another surprise for us. With a gentle voice the officer wakes him and asks Dwight to come with her. She takes him back to the station not to arrest him or interview (as Dwight suspects) but to let him know that the man who murdered his parents just finished serving his prison sentence and was released.

Dwight’s journey of self-destruction began twenty years ago with the crime. Saulnier lets the rusted blue car stand as a metaphor for Dwight: it’s in such bad condition that it surprises us when it actually starts! It may be dead on the outside but it can run just a little while longer, perhaps to complete one final task.  And it does. But it’s final task is not to kill (unlike Dwight) but to save.

Yet Saulnier doesn’t amp up the adrenaline to unbelievable proportions as in typical thrillers but allows Dwight move and breath at his own pace. The characters are realistically proportioned and look like real people and not the steroid infused bodybuilders that flaunt Hollywood action thrillers (another convention turned upside-down). Information isn't given in static exposition but discovered in pointed conversation, revealed almost casually and without exclamation point! We know this man Wade Cleland murdered Dwight’s parents but we don’t know why. In the first truly tense scene Dwight follows Wade and his family from prison to a dingy bar. Dwight sneaks in and hides in the bathroom. Instead of some lengthy confrontation with excuses and apologies, Dwight attacks viciously with a knife and stabs him to death. The scene is brutally realistic and over very quick. Saulnier shows the spurting arterial spray as Wade slowly and violently concedes his life. But now a war has begun between Dwight and the Cleland Clan putting Dwight's sister and her children at risk.

The confrontation between Dwight and the surviving Cleland family consumes the final two acts with a dehumanizing slow motion fury. From Dwight being shot in the leg with a crossbow bolt (and attempt to pull it out with pliers) to his kidnapping of Wade’s brother and this man's subsequent brain-splattering death (because that's what bullets do)murder has become contagious like the Bubonic Plague or Ebola. Isolation is the key to recovery and the final act ends in a distant lonely house owned by the Clelands. Dwight’s friend advises him earlier to shut up and shoot, no monologue or you’re dead as this isn’t a movie. But Dwight is fractured and broken and forgets his friend’s plea.

The truth is revealed and Dwight understands that Wade didn’t kill his parents: Wade’s father consummated the dead and his son Wade confessed and did the time. Dwight now wants the killing to stop but it’s too late. Shadows paint the wall like ghosts, formed by the muzzle flashes as the final gunfight leaves all but one dead: the youngest Cleland…who is just the right age. Dwight lets his half-brother live and mutters through a mouthful of blood, a mantra (or prayer)that hopefully saves this young man to leave  vengeance behind and to live a better life. The blue ruin has completed its final task.