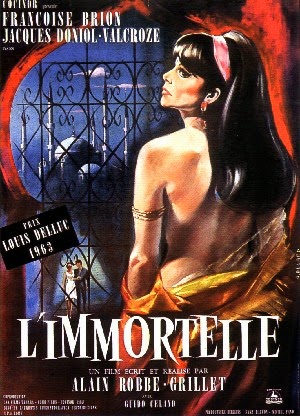 A nameless French man haunts the mazes of his own memory reliving and experiencing the same trauma repeatedly. Istanbul becomes his purgatory where the ancient crumbling structures are like bleached bones of some mythical beast and the language a secret code he is unable to decipher. For him, there seems no escape as even death brings the cycle full-circle once again.

Alain Robe-Grillet creates the same ambivalence and erotic mystery as his classic LAST YEAR AT MARIENBAD which was directed by Alain Resnais from very detailed shooting script. Robe-Grillet included specific instructions concerning camera movement, framing and editing. Once again, Robe-Grillet elevates Form over Substance as the mystical power of L’IMMORTELLE is not in understanding and connecting narrative links but in being immersed into the way it is told. The film begins with a long tracking shot of jagged ruins partially buried in the hillside. It is obvious that the shot is taken from a car as it speeds along a flat road. The opening credits are superimposed over this scene. As the credits sequence ends we hear the disparate sound of squealing tires and crashing metal; it’s as if the car we’re riding in as the POV crashes! Yet, there is no gimmicky camerawork to sustain this POV so it’s possibly another car crashing off camera. Without explanation we cut to a man without introduction, standing in a darkened room and looking through the wooden slats of a window as if he doesn’t want to be seen. Below is an older man sitting on a chair by the seaside. Suddenly, a beautiful woman’s face then interrupts this viewpoint through the slats. It’s an impossible physical image so it must be a dream or memory belonging to this nameless man. She stares at the camera (or man) and a playful smile dances across her lips. This is the beginning of a tale that cannot be explained, a mystery that cannot be solved but a visual adventure worth undertaking nonetheless.

L’IMMORTELLE is a beautiful film like a dream captured on celluloid in stark black and white detail. Robe-Grillet often crosses the axis and creates a disorienting spatial relationship between characters and the audience. He often utilizes a slow 180 pan with a character on the far left and as the camera moves slowly right the same person shows up on the far right, engaged in another conversation or behavior. Grillet also cuts scenes so it looks as if a character is crossing the room only to meet himself sitting or lying in bed. Often, small details have changed such as the drawing of a tulip pasted to the wall or the lighting has dimmed, conveying a possible change in time but not place. We also experience, like the nameless protagonist, the same actions and conversations but from different perspectives; Grillet often changes some small barely noticeable detail from each angle; it’s as if Grillet is showing the malleability and the impermanence of memory. Characters also physically disappear from scene to scene and sometimes contradicting the same temporal continuity.

The story is open to interpretation and is quite possibly meaningless. I believe that our nameless protagonist N is a ghost wandering back to the last few places he visited in his brief life: N is not aware that he is dead. He interacts with an exotic woman and other benign and sometimes weirdly stoic people who are also ghosts trying to show N that he has passed. Here people stop and stand silent as he passes as if life has become still as the grave, turning in his direction as he wanders past. He seems oblivious or at least unconcerned about this strange behavior. N is immersed in himself, his ego keeping him from “passing on”. Like JACOB’S LADDER years later, the people can seem cruel or kind depending on your perspective. Here, Istanbul is an ancient crumbling city full of ghosts.

L’IMMORTELLE is not a film for everyone. It’s a film for cinephiles, for people who love the style and Form of movie-making, and for those who see film as contemplative and sometimes rebellious. Alain Robe-Grillet has transmuted the dream-world into a physical reality to view…but something is always lost in transubstantiation.