THE ADVENTURES OF BUCKAROO BANZAI ACROSS THE 8TH DIMENSION (W.D. Richter, 1984, USA) 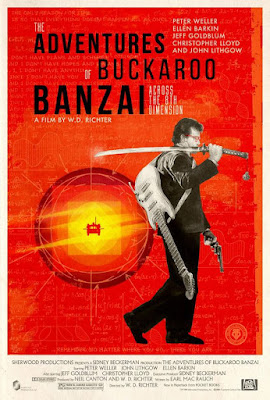 B. Banzai follows in his father's tire tracks and races through solid rock and into the 8th Dimension, where volatile life exists between the vast spaces of atoms and quarks. These evil creatures from Planet 10, once justly imprisoned by their peers, now seek to steal Banzai's Oscillation Overthruster and escape to their home world to wreak havoc and imbibe of cruel cold revenge. When Buckaroo stumbles into this vast conspiracy, he must save the Earth from nuclear anarchy and Planet 10 from genocide. Or something like that.

This audacious amalgam of genre conventions is successful because it takes itself seriously and refuses to be self-referencing: there are no subtle nods or winks towards the audience to break the illusion. The actors and director play it straight with ironic humor and crosscutting suspense. The attention to set detail and characters makes this zany world seem larger than the screen; we accept that even the President is awed by this New World Man. John Lithgow’s performance as the possessed Dr. Lizardo is gleefully berserk but perfectly within character of the demented and deranged scientist. The plot develops quickly and then catapults towards the violent conclusion leaving the audience a bit dazed and breathless not sure what to expect around the next corner. The synthesizer score (and wardrobe!) adds an 80’s pop culture veneer to this madcap adventure. Unfortunately, the Buckaroo Banzai sequel was never filmed: now that’s a crime!