THE SHOP AROUND THE CORNER (Ernst Lubitsch, 1940, USA) 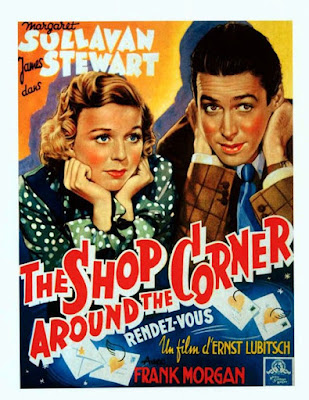 Alfred chases an elusive ink and paper fantasy, lost amid lofty ideals and imagination which are shrouded by the reality of his working-class life. Director Ernst Lubitsch’s gregarious film brings these characters together in a believably adversarial sales environment full of Eros and Thanatos.

Jimmy Stewart suffuses Alfred with just the right amount of lovable despair, his haunting eyes the mirror to a lonely soul, and Margaret Sullivan as Clara is sometimes a spiteful woman, but her beautiful visage belies the turmoil within. The supporting cast each fulfill an allotted role to carry the narrative tension and humor, but the acting is so good with taught pacing and scripting that all the pieces fit together creating a satisfying picture. The story reveals the pen-pal faux pas early in the final act and we feel the tension between Alfred who is testing Clara’s emotional depths: a women who is rather vicious in her condemnations of him. Lubitsch’s tender shot of Clara looking through the mail slot for a letter that we know isn’t there, her hopes and desires a vaporous dream, is a perfect reflection of cupid’s Cheshire grin. The film never becomes a humdrum melodrama and surprises with its honesty and pugnacious audacity, as lateral incidents include a cheating spouse, Alfred’s unjust firing, a suicide attempt, a nervous breakdown and a fistfight between “gentlemen”. Mr. Matuschek’s transformation is personably conceived: from cranky boss to humble man, whose heart melts during the frigid Hungarian winter. Finally, two disparate people reveal themselves truthfully, opening their hearts to one another to become victims of love’s fickle embrace.