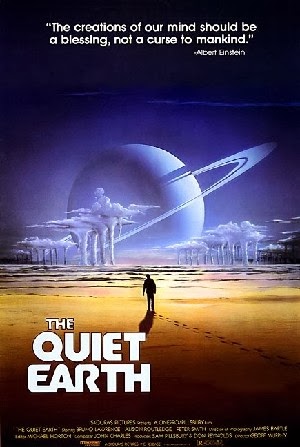 Scientist Zac Hobson’s world ends with a bottle of pills at precisely 6:12 A.M. but he awakens to a new reality: he is seemingly the last man on Earth. Confused, he explores this strange geography not sure if this is some internal dimension or an external result of the failed Project Flashlight, a unilateral experiment involving countries across the globe.

Zac begins to slowly lose his mind to the madness of isolation, becoming god of the empty streets and echoing lifeless cities. The gunmetal taste of suicide brings him back to sanity and he begins to monitor the world around him, taking measurements of the now pulsating sun. He meets Joanne and Api and their base human conflicts threaten to push them apart, to isolate them in a world of silence and create an emotional vacuum filled with the ether of despair. Through dialogue, they discover the reason for their existence; they all died at the moment the Project malfunctioned, preserving them in this empty world. Soon Zac discovers that this electromagnetic pulse is going to reoccur and their only hope for survival is to destroy the facility.

Director Geoff Murphy films in long shots of deserted streets and towns, lending an air of realism to this somewhat trite narrative. As Zac explores an empty house, a torrent of water flows from the kitchen ceiling, homage to Tarkovsky’s masterpiece SOLARIS. A crashed jet plane, abandoned vehicles, burning wreckage, and a still hot coffee pot, inform the audience that everyone just disappeared without a trace and which adds a level of realism for such a small budget film. But it’s the character’s juvenile emotional turmoil that almost unravels the story, which removes us from any sympathetic coherence: the three protagonists aren't very likable. Though we know more about Zac than Joanne and Api, we are still too detached from caring about their dilemma. Finally, Zac disappears in a mushroom cloud but awakens once again to an alien terrain where spidery clouds caress the violent blue surf and a ringed planet rises above the gentle mist.