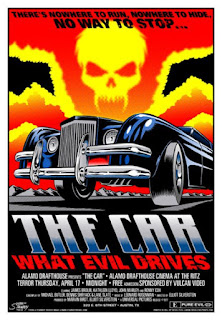 "Oh great brothers of the night who rideth upon the hot winds of hell, who dwelleth in the Devil's lair; move and appear," –Anton Levay from The Satanic Bible
The film begins with a quote from Anton Levay which sets the tone for the demonic debacle to come. Then Leonard Rosenman’s score sends chills up the spine as he interpolates the Gregorian chant Dies Irae into a brooding electronic nightmare as a cloud of dust rises and crawls like a venomous snake in the distance. (Note: Stanley Kubrick must have watched this film as the score is evocative of his use of music in THE SHINING a few years later). As the head of the cloud races closer towards the camera we see a black car spewing dust from its rear wheels on this dirt road. It’s immediately obvious in the juxtaposition of music and image that this car is Evil, born from the desert mountains and now speeding towards its prey. Silverstein’s excellent use of cross-cutting builds suspense as the car closes in upon two teenagers biking down a mountain highway. As the young man and woman bike through an ominous tunnel the car closes in upon its victims and sheds first blood. It’s a wonderfully designed opening as Silverstein utilizes long shots to tight close-ups as the camera speeds along with the chase between metal and flesh. We also get some nice POV shots shot through a red filter from inside the car but we never see the driver…or if there even is a driver!
The entire film is competently directed and structured by Silverstein. Though the car’s origin or purpose is never explained we can assume it’s demonic from the opening quote from Anton Levay. The film zooms along because very little time is wasted on explanation; Silverstein gives us a few slower moments of character building that relate tangentially to the plot. James Brolin’s private interactions with his girlfriend are brilliant in their inanity as they relate like real people and not avatars of real people.
The film suffers in its depiction of women. Though made in the late 70s the small town patriarchal attitudes haven’t evolved since World War II….or even the Civil War. Its only progressive woman, the girlfriend of the protagonist, is given a small measure of independence especially when she confronts the hellish car with expletives. Though these sticks and stones infuriate the venomous vehicle she stands safely on hallowed ground: however, she is soon mangled by steel and (Fire)stones! The film can be read as oppressive towards women’s rights; after all, look what happens to the one woman who is tougher than the men. The other female characters are the girlfriend of another sheriff whose loving presence helped him quite drinking (but these murders bring his addiction on full swing…or swig) and another as a victim of domestic violence who returns to the abuse. Importantly, the abusive husband is given a heroic characterization. The women are depicted as good people but submissive and the finale brings this into sharper focus.
The Evil Car (Evihicle ?) is forced off a cliff as the grand finale, the men banding together to celebrate their patriarchal victory. But it’s a pyric victory as the women are destroyed or relegated to background noise. As the Demonic spirit is released from the burning wreckage and rises angrily towards the sky (reminiscent of the Grasshopper entity in Hammer’s QUATERMASS & THE PIT!) we feel that Evil has been held at bay and “Good” won the day. But this would be a superficial and false realization. The subtle reality is that Evil has won merely by awakening the masochistic temperament of the abusive men who must band together…at the expense of the women. It seems the intent of the Demon was not to murder indiscriminately but to reinforce outdated social dogma. The destruction of the Demon is only spurious as the battle was already lost.