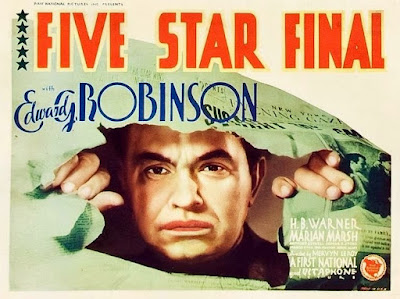 Yellow journalism written with the blood of innocent victims, the Fourth Estate reduced to intestate. Mervyn Leroy’s scathing indictment of tabloid news takes no prisoners and makes no excuses, headlined by a wonderfully nuanced performance by Edward G. Robinson as the Editor who struggles with a guilty conscience, whose moral ledger is balanced with circulation not compassion.

Joseph Randall is the managing editor of a newspaper whose subscriptions are falling every week because he actually prints important news and not exploitative stories. The owners decide to reopen a murder case from twenty years prior, a human disinterest story about a pregnant woman acquitted by jury of murdering her fiancée. The woman has moved on with her life and raised a fine daughter who knows nothing of this sordid tale. The daughter is betrothed to a wealthy scion and this public prattle would ruin the courtship. This of course leads to a tragedy which the tabloid tries to exploit for profit. Randall has reservations but the blood in his veins is as black as ink, so his morality is drowned in bourbon and soap: he obsessively washes his hands. Aline MacMahon is his secretary who sees the good soul buried in newsprint hoping he will do the right thing. Boris Karloff is at his creepiest as Isopod (though he’s given a full name in the script, the opening credits only refer to him by this single moniker) a man whose chameleon-like persona is perfect for an investigative reporter.

There are some moments that stand out. One such scene involves a triple-split screen as two conversations overlap as the daughter is calling the paper demanding Justice. She condemns the men she is speaking with and the split screen effect is perfect so we can see their performance without the need to cut. The actors get to act in rather long takes and we experience the conversation in real-time. It would not have been as emotionally effective if it were cut into small parts and strung together. Another great scene involves the husband discovering his wife’s body in the bathroom but faking his elation at his daughter’s marriage. He tells his daughter and her beau that she has “gone out” and he will be joining her soon. We know what this means but the young couple doesn’t. The performance is pitch-perfect. The ending as the daughter holds her retort by gunpoint asking for the truth: why did Randall and his Boss kill her parents. He simply says, “For circulation”. It’s chilling. When he quits his job he chucks his phone through the glass door. The film is fast, talky, and smart, wasting little energy on any point that doesn’t propel the plot.

Randall may have increased the papers circulation temporarily but he ended a flesh and blood person’s circulation permanently. One wonders if he will ever scrub his hands clean. Or his soul.