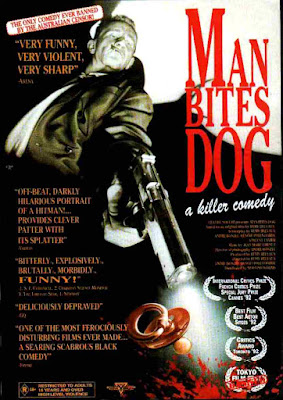 "When a dog bites a man, that is not news, because it happens so often. But if a man bites a dog, that is news." John Bogart, Editor New York Sun.

This militant satire is a biting indictment of journalistic expression; of the fast-food media’s desire to report the esoteric as mundane; to canonize brutality for the sake of the public’s “need to know”. Rémy Belvaux’s film differs dramatically from Oliver Stone’s NATURAL BORN KILLERS in cinematic philosophy though both films are thematically similar. Stone embraces Eisenstein’s intellectual montage principle and extracts meaning from disparate images with rapid-fire quick cut editing, whereas this film’s visual profundity relies on mise-en-scene decoupage.

Belvaux achieves meaning through the relationship of objects (and people) within the frame; he utilizes long takes and real environments to sustain the illusion of reality. Benoit, the natural born killer, addresses the audience directly because this is his film; he’s the star in his heliocentric universe. This killer stalks the modern jungle, he hunts beneath the canopy of concrete and steel, and he is the innocuous tenant who lives next door.

Absurdly, a film crew follows this depraved sociopath to document his every move, to glean some titular insight into his motives and psychology. His victims are ignored because they aren’t valuable news stories; they don’t garner high ratings because their lives are as disinteresting and repetitive as ours. Benoit’s ubiquitous narration doesn’t create intimacy; it’s a profane dialogue that separates the audience from his engorged persona. But the film crew soon becomes a part of the story and participates in the carnage, they cease to report the news and become the news, accomplices to murder.

When a camera measures reality it automatically changes it, the composition of elements excludes and promotes information within the frame creating a new viewpoint in order to manipulate the audience. The illusion becomes more tangible that the solid world around us. Like “Reality” television and the media’s brainwashing concept of Doublethink, it encourages the propaganda of TruthLie.