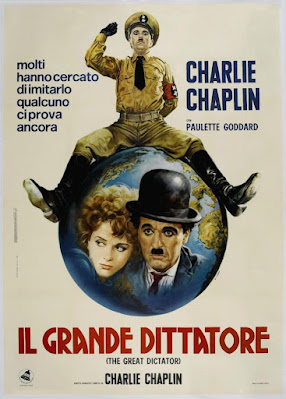 Chaplin condemns the Fascist simulacra, machines in the shape men fueled by nationalism, and curses leadership founded on murder and hatred: the philosophy of the double-cross. A prescient call for humanity amid the infrastructure of isolationist denial, combining pathos and Thanatos into a delectable satire that provokes while it entertains, extruding desperation for a world on the brink of madness.

The film contrasts the protagonist, a Jewish barber and war hero, a man who loves his country, with his doppelganger the poisonous Dictator who has usurped his homeland, a megalomaniacal leader whose goal of world conquest is soon to be realized. Chaplin’s bombastic ballet begins on the eve of The Great War, as the unnamed barber loses his memory in a plane crash and ends with his impassioned speech on the morning of the Second World War, as Tomainia prepares to invade its peaceful neighbor. The story in between is contrived with Chaplin’s sublime artistry, finding humor in the humane, portraying his Jewish characters with complexity and dignity. In retrospect, it is frightening to consider his precognitive narrative as his protagonists are relegated to the poverty of the ghetto, stricken with fear of the concentration camps, denied the Rule of Law by goose-stepping thugs of the double-cross. His parody of Adenoid Hynkel (Adolf Hitler) and his Murder’s Row of Garbitsch (Joseph Goebbels), Herring (Hermann Goring), and cohort Benzino Napaloini (Benito Mussolini) is dead-on. Hynkel becomes intoxicated with power, balancing the world in the palm of his hand, and it’s not difficult to imagine Hitler doing the same.

The little barber stands up to the Stormtroopers, a voice of reason lost amid the inane babble of propaganda, and joins forces with Schultz, a soldier court-martialed for speaking against Hynkel, and together they are sentenced to a concentration camp. Their escape leads to the barber’s mistaken identity as the Dictator, and to save their lives he must deliver a speech as Hynkel: this impassioned plea transcends the confines of the story, it is a declaration of peace, of rediscovering free-will from the program of bigotry, a monologue for mankind to rise above machine morality, to think with the compassionate heart and not the deadly gun. Chaplin’s powerful voice is imbued with gentleness and humility, a stark contrast to the gibberish spouted by flamboyant Dictators who are full of nothing but hot air.