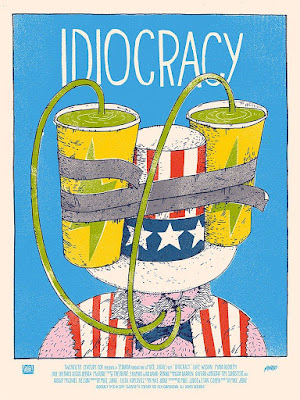 Luke Wilson in literally an average Joe, a victim of the military’s unnatural selection for a cryogenic experiment: he awakes to a nightmare of ubiquitous obtuseness, a future society where stupidity has evolved as the status quo. Mike Judge’s dunce capped satire is over-the-top hilarious but not far from current cultural trends where Reality TV dominates, and Conglomerates consume the landscape.
Isaac Asimov wrote about the decline of human intelligence years ago, as college graduate working couples nurture fewer children than the religiously fixated and miseducated who birth and rear new monstrosities on a regular basis. Multiply this by a few centuries and this militant satire, though impossible (an elite class would still be needed to run the computers and maintain the infrastructure), still resonates with a tone of truthfulness and ill-humor. The attention to detail is farcically incisive: clothes slathered with advertising, grunts and inane slang as a common denominator, sex infusing every facet of society (such as Starbucks and Fuddruckers), Costco’s huge warehouse crouched amid the rubbish-strewn environment like some Lovecraftian horror, and the redacted history that literally depicts Chaplin as THE GREAT DICTATOR and has UN (pronounced monosyllabically) dinosaurs saving the world from fascist behemoths wrapped in Nazi regalia. Though funny, this prescient warning should be headed as we see the rise of Creationist Museums that vomit their religious myths as fact: the human race is becoming lost in a blink of a cosmic eye, stumbling towards extinction by our own hands!
Luke Wilson as Joe and Maya Rudolph as Rita are excellent as they exemplify the empathetic human spirit, this emotional connection that otherwise would leave the audience to despise the entire species. IDIOCRACY is sinfully smart and current Reality shows such as Joe Millionaire or My Mom, Your Dad make Ow My Balls! look like VERTIGO. But in truth, the lowest common denominator will never realize the joke is on them.
FINAL GRADE: (B+)
Words Chosen by Alex DeLarge