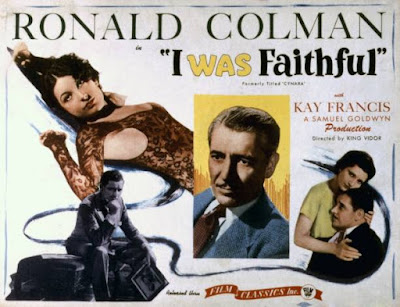 Marriage is a prickly artichoke, I suppose. King Vidor’s film is a tragedy of unfaithful matrimony yet withholds judgment on the participants from the cheating husband to the matronly wife and fails to condemn the mistress for her obstrusive behavior; even the elderly pervy friend gets a pass for his immoral indiscretion in instigating his cohort astray.

Attorney Jim Warlock (I’m changing my name to Jim Warlock. That is the coolest fucking name!) is a boorish and gentlemanly husband to Clemency, their marriage seemingly secure in its mundanity of love and mutual respect. Yet Jim is encouraged by his elderly friend Tring to “play the field” when Clemency travels to Venice with her sister Garla to avoid a social catastrophe (RE: Garla fucked some dude she shouldn’t have). Jim meets Doris after “nudge-nudge-wink-wink know what I mean?” provocation from Tring. Innocent flirting ensues where Jim judges her in a beauty contest (his participation sneakily devised by Tring) and a cinema date to see a Chaplin film. Side note: always marry a girl who laughs at a Chaplin film! The short is A DOG’S LIFE and it’s neat to see it within the film in a theater full of laughing patrons! It could also be read as a subtle insight into Doris’ flawed character, her life full of depression and anxiety...a dog’s life, so to speak. Soon, Doris casts her own erotic spell over Warlock and he agrees to a brief affair that lasts longer than expected: upon his wife’s return Doris cannot break off the affair and desires his daily affection. Tragedy ensues.

The film is told in flashback with Clemency asking for insight, not facts, into his illicit behavior as he packs to depart for South America, his career kaput due to Doris’ suicide and his letter linking him to her affairs. So, the bulk of the film is told from Jim’s perspective and should be taken as such: is it truthful and honest, or skewed to make him seem morally upstanding? It’s interesting to consider. It is refreshing to see a man accept consequence without casting blame on others (especially his wife), and Tring somewhat redeems himself by encouraging Clemency to forgive her husband his vaginal trespass.

The direction is first-rate and allows the excellent cast of Ronald Coleman (Jim fucking Warlock) and Kay Francis (Clemency) to really shine as they imbue their characters with passion, anger, resentment, understanding and forgiveness (but not for themselves). DP Ray June’s compositions seem rather mundane in the first act but come alive with extreme high-angle shots and some long tracking shots later in the film. His use of close-ups in the final act are shattering and redemptive. Overall, a solid melodrama that doesn’t condemn and offers hope amid sadness and loss.