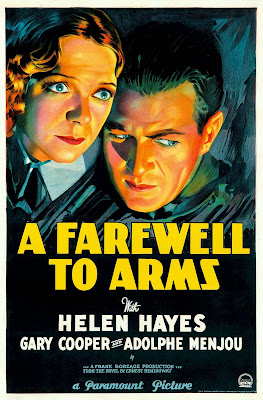 Lovers fighting their own battle during The Great War trying to design a future together but separated by violent circumstances. Lt. Henry is an Ambulance Driver who specializes in women’s arches while Catherine Barkley is a Nurse, not seeking love but finding it anyway, her healing spirit unable to mend her own wounds both figuratively and literally. Director Frank Borzage condenses Ernest Hemingway's novel into pure melodrama as Gary Cooper and Helen Hayes are so cute together, their disparity in physical height adorable when displayed in a medium-long shot, walking together hand-in-hand.

Though the Great War is relegated to inconvenience when duty and circumstance separates the two, it’s the power of the three actors (Cooper & Hayes already mentioned) with Adolphe Menjou as Henry’s philandering confidante who values his friend’s feelings over his own jealousy. DP Charles Lang won the Academy Award for this film and it’s deserving. From the opening shot of three ambulances struggling up a dangerous mountain road which tracks to the left to reveal a legless soldier in the foreground and continues past and follows the vehicles before cutting to medium-shot of the driver. It’s obviously done with miniatures and forced perspective yet it’s visually interesting and one should marvel at the artistry, as Lang could have designed a simpler shot with edits and inserts. The entire film and its lighting are technically brilliant and adds to the flavor which becomes bitter by the denouement.

Lt. Henry abandons his duty for love while Catherine abandons her cause to protect her paramour, in order to secretly birth their child. But Henry goes AWOL and is able to embrace her as she lays dying after stillbirth. As the bells of freedom and armistice ring like bitter wedding bells, Catherine makes her final peace and Henry declarers his. It’s heartbreaking.