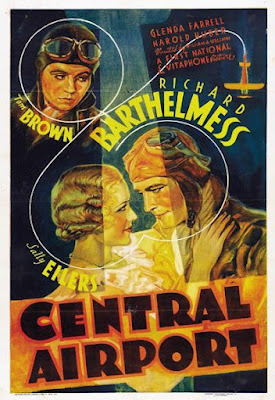 A Commercial Pilot becomes stuntman who goes onto heroic command of a squadron of aviators before saving his former beau and his Bud from certain death. He may lose an eye (and other various body parts) but gains his self-respect…and a sister-in-law. William Wellman’s action-packed melodrama packs a punch depicting dangerous aerial stunts and crashes juxtaposed with well photographed miniatures: the film is one-third transition, one-third stunt work and one-third melodrama between siblings.  The other .33333... is lost in the fast-paced editing.

Wellman begins the story with a look into Air-Traffic Controllers trying to locate Jim Blaine’s (Richard Barthelmess) passenger plane in a heavy storm. In the days before radar and GPS, coordinating and locating flights was obviously terrifying. Jim’s plane is eventually discovered crashed on a hillside with him as the only survivor. The FAA (or its 1932 equivalent) blames Jim for flying under the storm warning and being caught in a cloudburst so his career is over. He eventually meets the beautiful Jill Collins hanging from a tree moments before her brother’s plane breaks-up in flight (which we witness with very cool miniature photography). Both now share an uncertain future together and become a traveling stunt show. Jim won’t commit to marriage because their jobs are so dangerous so when Jill meets Bud, Jim’s brother, and convalesces after another crash, Bud and Jill secretly marry and Jim takes flight.

Sidney Hickox’s photography is excellent as we get point-of-view shots during barnstorming stunts and great compositions as the aircraft twist in turn in flight. His work together with the streamlined editing makes this film race along towards its stormy denouement. The moments of low-key lighting reveal hidden desires and secrets within our protagonists and create emotional frisson without the need for talky exposition: Wellman likes to show instead of tell. Though the story balances between serendipity and miracle it’s always grounded in strong characters and their morality. And mortality.