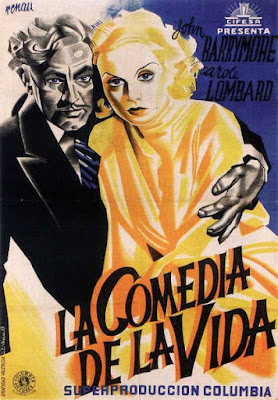 Oscar Jaffe finds his Trilby, er, his Plotka and by the power of his hyperactive hypothesis transforms this ingenue into a duplicitous duplicate. Jaffe is one excitable boy! Howard Hawks allows John Barrymore to go “full fettle” as his marathon performance of excited utterances and physical fandango leaves the audience breathless, matched only by Carole Lombard’s hand-wringing histrionics and hysterics. DP Joseph August’s camerawork is competent but the film is stagey and focused upon dialogue (mostly shouted) composed in medium shots; it’s not fancy or intrusive but gets the job done.

The Svengali-like plot is quite simple: Jaffe is a genius Broadway promoter who molds a no-name actress into a Star by abusing and demeaning her until her own psyche is subsumed by the sheer force of his will. A spider’s web of confused blocking scrawled upon a stage floor and a pin in her petite derriere eventually leads to curtain calls and fame for Lily Garland previously of the Plotka surname. But this is Jaffe’s story and the film follows the rise and fall of his career which is facilitated by his physical and psychological affair with Lily. Once she leaves Broadway for Hollywood and abandons her lover because of his continuous abuse, Jaffe’s shows flop which bankrupt him. So he must get her back into one of his shows by hook or by crook. The film is about his torment, not Lily’s as she becomes the MacGuffin (as Hitchcock would say), the secret serum to his success. The slapstick hijinks are a method for the madness and Jaffe remains constantly in motion like a shark just to sustain his involuntary functions. This feels like a 91-minute boxing match that goes the distance!

Hawks could have used the film to provoke criticism or meta-parody (A Hollywood film about temporary beauty and success of Hollywood) but instead chooses sadism, though the cruelty is overblown and disproportionate which makes it often hysterical. That Barrymore can play a pompous ass yet make the character sympathetic when needed (even if it’s a facade) is due to his excellence as an actor. There is no backstory to Lombard’s character, she is just an archetype. Hawks could have ironically depicted Lily’s success mirroring her complete loss of identity to her dominant beau (she truly becomes him) yet the film remains a lightweight bout carried by two heavyweight performers. After all it’s a romantic comedy and not a Nathanael West novel!