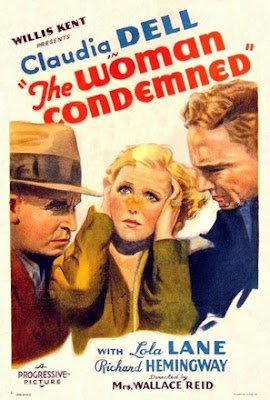 THE WOMAN CONDEMNED (Dorothy Davenport, 1934) Reporter Jerry Beall gets the whole romance angle backwards, as he and his paramour discover the manacles of Holy Matrimony before the shackles of lifetime commitment...for murder! The directing credit goes to Mrs. Wallace Reid which betrays Ms. Davenport’s accomplishment in this male-dominated business: I suppose she didn’t quite have Dorothy Arzner’s “street cred”. Or else she didn’t want her professional name attached to this absurd and preposterous film!

Fuck it, I had to watch this twice to confirm that the story actually made some semblance of sense because it directly lies to the audience in order to promote the crazy revelation. But a story should reveal subtle clues through each act and not rely on talky exposition to explain confounding plot points in the final reel. As the brief runtime ticks away and each scene builds one atop the other, we are given no hints or “hunches” (Jerry’s favorite word. He utters it at least 20 times and it’s fucking annoying) to propel the narrative forward: few establishing shots, no introductions of major characters, no background information, and no explanation for any behavior as everything is shrouded in secrecy. There is no baseline that allows us to understand a thing so we’re surprised in the final act. But this story misleads us utilizing a “red herring” conversation that is not only unambiguous but patently and logically false. It reminds me of Hitchcock’s use of the strategic deception in STAGE FRIGHT told directly to the audience to induce suspense but here, it’s a flaw that ridiculously skews the film. The structure of the film is perfectly straightforward: no flashbacks, flash-forwards or cross-cutting just one plodding scene after another. The camerawork is dull and amateurish in composition and graceless in movement, often slow in pulling focus displaying too much headroom. The sound design is annoying with magnified footsteps thumping on set and sans a musical score. The main character of Jerry Beall is punchably entitled with a frat-boy smirk that needs to be removed from his face with force. The chemistry between him and his “prankster” girl is nonexistent like a mixture: that is, no reaction. It’s like watching mannequins snuggle.

Now, the plot reveals my seething anger and waxing interest: Jane Merrick a radio star takes a mysterious holiday without explanation to her closest friend and boss Jim Wallace. I mean, he wants to marry her but she has some hesitation so there could be a dark and eerie secret in her life. Jane speaks on the phone to an unidentified man who only takes cash and wants to give her the freedom she deserves. She then disappears for some unexplained length of time and the radio show is losing it’s prime advertising, so Jim hires a Detective Agency to find out where she is. There is a mysterious dude lurking at her apartment and police chase him away. Then another mysterious woman is lurking at her apartment and she’s caught. Taken to Night Court she is “saved” from incarceration by Jerry a snarky crime reporter who convinces the Judge that she’s his fiancee who was only playing pranks. So in order to cure this cutup the Judge performs a quick legal marriage and sentences her to Jerry, now her husband! WTF? This gal Barbara enters the story without introduction and remains silent about her involvement until the very end which again makes little sense. Now Barbara and Jerry get to know one-another over dinner and a fancy show but soon she’s secretly stalking the same apartment with Jerry unknowingly and coincidentally investigating the story of the missing radio star! Barbara witnesses a shakedown by a shady dude named Dan from the earlier scene as Jane hands over some cash but hides the jewelry. He exits then a scream and gunfire! Of course, she’s left holding the pistol and held for Jane’s murder! Not once is it revealed that Barbara is the detective hired to discover Jane’s whereabouts as she keeps her intentions secret not only from Jerry and the police but from the audience. So Jerry trusts her innocence based on his notorious hunches and eventually discovers a phone number to a local sanatorium in Jane’s apartment. Looking for a clue to clear Barbara he gets the address and does some stalking of his own. Peering through the window of the recovery room, he happens to see doctors peeling back bandages from a patient’s face and holy fuck, it’s Jane! But we know she was shot dead in her apartment, Jerry knows she was shot dead in her apartment because he was there with police, and Jim knows she was shot dead in her apartment as they brought him to the scene for questioning. But Jane doesn’t know she was shot dead in her apartment because exposition from the doctor reveals that she has a twin sister June who was hiding out in her apartment while Jane was on “holiday” for this secret and shameful operation...to remove a birth mark from her face. Another WTF moment. What fucking birthmark...like, what? We are shown Jane is close-up in the first fucking scene and there is not a blemish on her face. And what freedom was the doctor talking about? Consider me perplexed. So it’s June who is dead. Now the big prevarication from the screenwriter is considered upon reflection: Dan who was shaking down June actually says “Well, radio stars have plenty” to trick us into thinking it’s Jane who was killed well before any mention of a twin sister! But Dan has known June for years as this is the guy she’s hiding from so, like, how does he not know June is a twin of Jane? Of course he knows because he mentions her being a radio star! So the equivocal denouement is predicated upon Dan’s shock and surprise in seeing June alive again like a ghost materializing from the darkness (a ruse inspired by Barbara and performed in conjunction with the police). If he knows she has a twin sister he should see the parlor trickery for what it is! But of course he screams his confession and all ends well for Barbara and Jerry, if being married to this smirking jerk counts as a happy ending. I think I’d rather be June.

This gets a failing grade in technical competence but it inspired me watch it twice so, there’s that. I actually liked it better the second time, believe it or not.