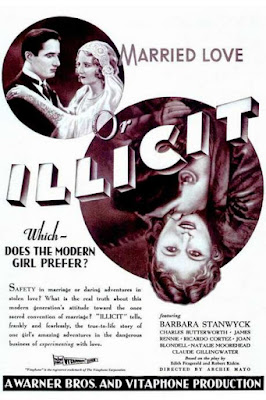 Anne Vincent will pay nearly any Price for Dick, it’s True. How’s that for a double entendre? Archie Mayo’s static and verbose direction is enhanced by the vivacious performance from Barbara Stanwyck whose adorable yet intelligent disposition lights up every scene. Independent and fierce in her morality, Anne forsees the poison of becoming an Ives (poison Ives-y, OK, bad pun) surrendering herself to patriarchal domination. To be fair, her beau Dick and his wealthy father are presented as good and well meaning men, not as stuck-up Aristocrats who consider her forbidden fruit. The story presents them as typical men occluded in their social hierarchy of inequitable marriage vows, unable to actually perceive her viewpoint. They’re not unwilling or even condemning, feminism is just a concept beyond their comprehension.
The story involves Anne, her lover Dick, Price Baines (cool fucking name) who was once Anne’s swain and Marge True a socialite who loves Dick. The story could descend into trite melodrama but it smartly focuses upon Anne and her moral conflict about marriage. Price and Marge remain at the periphery and establish emotional conflict but neither is judged harshly as their intentions aren’t completely anomalous, but archetypal. Anne and Dick’s torrid love affair must end in marriage which is her greatest fear, forced into civil union for uncivil reasons. Anne isn’t afraid of commitment she’s afraid of being reduced to property: words not uttered by her but to her by Price Baines! The contractual relationship is paternally imbalanced by nature, an entitlement invisible to those who benefit the most. But Anne senses this and resents the need for holy matrimony just to provide social standing or prove loyalty: why can’t they just love each other yet remain themselves?
Barbara Stanwyck absolutely owns this role. She is smart, sexy in an unpretentious way and able to portray a myriad of emotions in one close-up: if this woman loves you don’t fuck it up! The story doesn’t reveal much of her background about family or work and we get the feeling that Dick doesn’t much care either. It’s obvious they adore each other so it’s disappointing that they become the very thing Anne feared the most. Joan Blondell is Duckie, a friend of both Anne and Dick and though she’s only a minor character who presence doesn’t really affect the plot she is still memorable. The film ends with Anne’s moral surrender and we hope she and Dick have both changed: can they be independent together?
Final Grade: (B-)
Words Chosen by Alex DeLarge