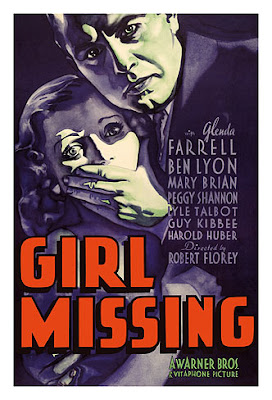 Kay and June are Chorus Girls with hearts of pyrite and the bank account to prove it. Robert Florey’s genre-mashing romp of quicksilver comedy, romantic accents and devilish mystery never quite congeals into a satisfying whole yet remains enjoyable enough for its 69 minute runtime. The direction is lackluster and Arthur Todd’s cinematography competent but it’s sidekick Glenda Farrell quick of wit and tongue that really steals the film!

The opening scene of patriarchal patronization as a wealthy middle-aged man paws and whines to his skittish female escort about his demands to make love, while she deflects and delays his uncontrollable urges until her “sister in arms” returns: this is our introduction to our protagonists Kay Curtis (Glenda Farrell) and June Dale (Mary Brian). June is the honey who attracts all of the Wasps and Kay the bug-spray who keeps them at a safe distance. Abandoned by their current paramour and stuck with the hotel tab, they must find a way to transmute their meager $50 into $700 large. By coincidence, they bump into (before being bumped off!) Daisy a chorine cohort who is masquerading as a society girl and who is engaged to Henry, a young rich man. Coincidence and conspiracy ensue until Daisy disappears on her wedding night and the young affluent husband is left holding the bag and an empty bed. Soon it’s a murder mystery and seemingly unrelated vanishing act that conjoins in the final act as our heroines must out-act the fiendish accomplices. It’s cartoonish and absurd yet quite a treat to see the beautiful Mary Brian and the incorrigibly lovely Glenda Farrell strut their Pre-Code stuff.

The structure of the film splits in the second act as we leave the point of view of our sisterly companions and get an inside view of Henry and Daisy’s wedding night. The film feels flat and uninspired without Kay and June but picks back up when the contrived plot allows them back into the story. It becomes a police procedural and doesn’t totally keystone the cops but it’s Kay and her grand ideas that outsmarts them all. Kay bags her $25,000 reward but June earns something so much richer.