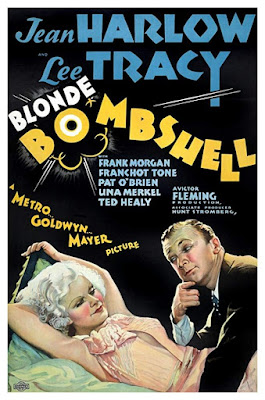 For Lola Burns the “If” Girl, her life of sweet succulent oranges is more like a glass of leftover sauerkraut juice! Victor Fleming’s deft direction is wonderfully amplified by Margaret Booth’s quicksilver editing which powers this histrionic parody like rocket fuel, allowing the story to race from scene to scene without getting bogged down in establishing shots and transitions, with shouted dialogue impacting like thunder. Reading about BOMBSHELL makes it clear that this was an irreverent take on Clara Bow the “It” Girl but here, Harlow’s own personal ghosts seem to haunt the narrative, making this less humorous and more tragic in retrospect. There is little doubt that Jean Harlow as Lola Burns commands every scene she’s in with a spectacularly overblown performance that is believably mediated by a few emotionally reserved scenes that feel quite genuine. One in particular involves her desire to adopt a baby and when she speaks to her ex-lover (or current, hard to keep track!) about holding the child and wanting to give this abandoned child a better life one perceives Harlean Carpenter whispering beneath the veneer of her Hollywood image. The same feeling dominates Lola’s frustrations with her drunken gold-digging father and incorrigible brother who take advantage of her wealth and give little in return: yet she loves them unconditionally.

Fleming’s film fails to balance comedy and tragedy and becomes upon close inspection a rather sadistic tale of survival in a Nathanael West inspired Hollywoodland...but played for superficial laughs and guffaws: its kindness is tempered with cruelty. The opening montage of glamour and headlines dissolves into a practically comatose Lola buried beneath her blankets face down, platinum hair like a rat’s nest: it’s a beautifully realized opening as we are immediately introduced to the person Lola Burns, not the image. And she’s just like us too! But the film doesn’t build on these intimate moments instead its purpose of punchline comedy overwhelms. Through twists and turns we catch glimpses of the young woman beneath the masquerade but we’re pulled back, like Lola, into her anxious non-stop reality. What makes the film cruel is in the way those who profess to love her (which she truly believes) choose to manipulate and lie to her for their own fortunes. Lola is a kind person yet that’s also her greatest flaw. Lola is convinced to honor her contract but there is no honor for her, only slander, ridicule and shallow adornment. Fleming wants us to laugh at Lola’s discovery in the final reel but once again, here in Hollywoodland there is no happy ending for its brightest star.