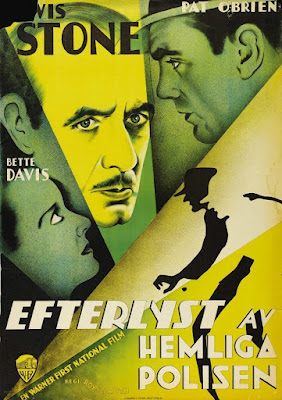 Pugnacious Detective Butch Saunders gets demoted to “kindergarten” to give his knuckles a rest and his brain a workout. Trouble is, his atrophied brain oozes patriarchal entitlement like sweat from his pores; a cop who isn’t above a little domestic violence. Pat O'Brien portrays Butch as a thug whose shield gives him power over those he is supposed to help: as his new boss says, “Your business is to protect the public not persecute it”. How very prescient but it was a truism in 1933 and it’s one now. Butch is the worst kind of cop by our contemporary standards but here in this ‘33 fiction he’s only typical.

The opening credits are neat as a filing cabinet is opened and a photograph of each actor is pulled like a case file depicting their name and character. The first half of the film is told in fractured increments, tiny stories about missing persons (of course) that the bureau investigates and solves, sometimes with brutally unhappy endings. The detectives often visit the morgue looking to identify the nameless corpses. One of the first scenes depicts Joe (Alan Jenkins) visiting a morgue looking for an ID on a missing girl. He pulls out a slab and peels back the sheet as the camera, low angle, focuses upon his face. Annoyed, he complains that he can’t make an ID on the corpse because it’s head is smashed in. The morgue attendant says that one jumped in front of a subway train. He pulls out the next one with a tag that says “poisoned” as cause of death and it’s a beautiful young woman who looks peaceful in her eternal rest. The camera fades out. Later on, Joe gushes over a photo of a woman chopped to bits and brags that he had to piece her together like a jigsaw puzzle to identify her.

As the film progresses and Butch’s two-fists outwork his brainpower (and our Constitutional Rights) we learn of his unholy matrimony to the gold-digging Belle (Glenda Farrell) though there isn’t much to plunder, it seems. When the beautiful Norma Roberts (Bette Davis) appears nearly half-way through the film Butch takes her case personally. His treatment of Norma throughout the film is condescending and manipulative by using his position as a cop to hold power over her. There is zero chemistry between Pat O’Brien and Bette Davis and her character says the words in the script but Davis empowers them, not with fawning femininity but apathy: she’s quite brilliant. There’s a murder mystery, or not, and a case of mistaken identity, or not, but when Butch learns his wife is a bigamist his militant justice just isn’t funny.