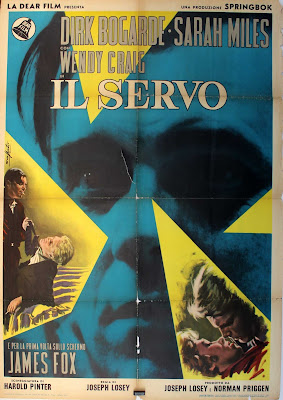 Hugo Barrett is seemingly a model servant, a man of impeccable references and character, his black suite and bowler hat a charming anachronism that delineates his social status, a man who takes pride in his job. Tony is a young man, a wealthy playboy with grand ideals but locked into a life of ennui.

Tony hires Hugo and soon comes to depend upon him both as servant and caregiver. Hugo slowly but steadily fosters this relationship and begins to place himself in a position of power, forcing his master’s fiancé into a marginalized role and introducing a femme fatale into Tony’s life. Hugo manipulates Tony into allowing his (Hugo’s) “sister” to move in but it’s a ploy to seduce Tony and invert their rigid social standing by becoming masters of the household…while Tony serves the servants. Tony becomes the mark, his major flaw a sense of duty, and it’s this inherent and commendable trait that Hugo exploits: Hugo is a man of selfish needs and violent temperament who hides behind the mask of civility.

Director Joseph Losey and writer Harold Pinter once again collaborate to examine archaic British cultural mores, to vivisect the class structure and reveal the marrow of human nature that transcends any social hierarchy. Losey utilizes languid camera movements and tracking shots in claustrophobic spaces, often framing the characters as one dominates the space either by close-up with the other in deep focus or as one stands unflinchingly above the other. He often films reflections in gilded mirrors, as master and servant begin to transpose their allegiance and become opposites. Tony’s fiancé is redacted from his life by the powerful influence of Hugo as she suspects that something is indeed wrong, while Hugo’s “sister” is actually a weapon of sexuality, blackmail that keeps Tony a slave to his base desires.

The keystone of the narrative takes place in a bar haunted by reflections where people are as insubstantial as whiskey fumes, eyes no longer sparkling with life but voiding it. Here, a “chance” meeting between Hugo and Tony leads to a “heartfelt” confession from Hugo as he begs to be given a second chance. Losey films the scene with Hugo as the dominant force, his tearful pleadings reflected in the bar’s huge mirror and framed by a vase full of flowers (a visual call-back to a previous trope). Losey positions Hugo on the left side of the frame and Tony on the right for the entire scenario then shockingly crosses-the-axis. He cuts to a reverse angle (or mirrored shot) which put Hugo in Tony’s previous position: a powerful visual image that foreshadows the final act. He has totally usurped his master’s place.

In a climactic scene, Tony and his servant are drunkenly playing a game on the staircase with a violent riptide underscoring the scene. Tony is on higher ground but he slowly allows Hugo to take control as he climbs the stairs until they both stand on equal ground…until Hugo orders Tony to pour him a drink. The servant has now conquered the household, and the film descends into a drug addled orgy where Tony’s fiancé stumbles from the inequity to seek the cold slivered air of a winter night, slashing her back to her senses. THE SERVANT is a film that not only examines class distinction but blurs the lines; where the wealthy young man is nothing but naïve while the lower class butler seeks his deconstruction. Here, the Ruling Class is victim of its own devices.