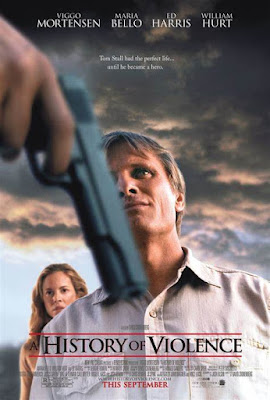 Tom’s life stalls amid the routine and obliging sincerity of his rural existence, until the monsters creep murderously from the shadows and reveal his true face. His past is like his aged pickup truck, rusting away nearly forgotten in the barn as the years take their toll, but whose engine must sputter and spark into life one final time.

Director David Cronenberg shows us the real monsters that stalk our world, and in a child’s scream catapults us to Millbrook, Indiana: a Capra-esque fantasy that will soon be shattered by secrets and violence. The nefarious Joey Cusack has been subsumed by a new identity, and Tom Stall has erased his past and become this new persona. But can the past ever be laid to rest, or will it continue to haunt us, like fear of a malignant tumor once removed whose return means almost certain death. Tom’s Darwinian instincts imbue him with the skill to save innocent lives, but his past is quickly catching up with him.

Cronenberg examines the familial bonds and questions its moral foundation when built upon deceit; is salvation and forgiveness possible? From father to son passes the virulent impulse of destruction, as the bloodshed escalates until there seems to be no other way out…except death. But Tom chooses to confront his past and put Joey to rest forever, to negotiate with his broheim, but water is thicker than blood. His final rampage leads to a baptism, as he turns his sword into a plowshare and washes away his sins: he is Tom once again.

The final mise-en-scene as he enters the kitchen is sublime: the family is eating supper, Tom's traditional place empty, then his daughter sets his plate as his son passes the food while his wife looks down, unable to look upon this stranger. She gathers her strength and meets his tearful gaze as Cronenberg shoots extreme close-up of Tom’s eyes…and we feel the charge of this internal struggle expressed without a single word.