THE MOST BEAUTIFUL (Akira Kurosawa, 1944, Japan) 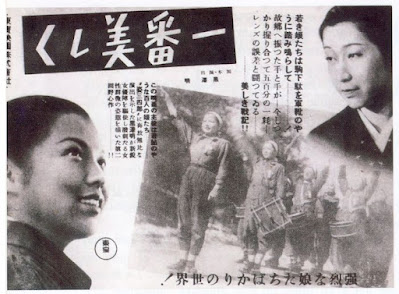 The indomitable spirit of Japanese culture is mirrored in the humble women of an optics factory: where one woman may die for the people, and that the whole nation perish not. Akira Kurosawa’s second film is wartime propaganda, a manipulative composition that utilizes cinema as political dramaturgy; it demands the authority of a documentary but subtly conceals a fictional structure, using wonderful actresses and filming in controlled environments where movement and lighting can be completely controlled. Though Kurosawa does not extol the Emperor’s divinity, he imbues the story with the need for physical sacrifice while not surrendering individuality: a theme that would become commonplace in his oeuvre.

The Matriarchal structure of the film empowers this group of women but more importantly, shows that their leader Watanabe is of equal value to the elder men who command the factory: her credo of “keep on trying and do your best” is not a hollow motto…but an intrinsic value that will be tested and overcome at great expense. The opening title cards proclaim death to Japan’s enemies, and he cuts to children standing in line as a godlike voice, full of electric sympathy and remorse, tells them that emergency production must begin immediately: the men must increase their output by 100% and the women by 50%. Watanabe is taken aback by the effrontery and insists that their ration be increased to 75%! The women push themselves to their limits, hiding sickness and injury, even carrying the burden of those who have difficulty making their own ration.

Kurosawa uses Riefenstahl inspired close-ups to show teamwork and camaraderie during the volleyball games, skewed angles and smiling faces, but always focuses his own optics upon the lovely and bold women, portraying them as human beings and not brainwashed subjugates. There is no coincidence in the use of a seemingly minor optics factory as the setting for the story: it both reminds the viewer of the camera’s lens but also as a metaphor for the eyes of Japan; eyes that must be perfectly focused upon the enemy to ensure victory.

In retrospect, the opening scenes become haunting like Resnais’ NIGHT AND FOG, the wooden factory and stark living quarters like an abattoir full of victims, exploited by murderous theocratic dogma. Kurosawa hones the use of transitional swipes and dissolves, to project a specific stopping point or show the passage of time: all elements that would become a hallmark of his technique. THE MOST BEAUTIFUL is Watanabe, who works past the point of human endurance so that her minor error does not jeopardize one soldier’s life: she lives by the very creed she preaches.