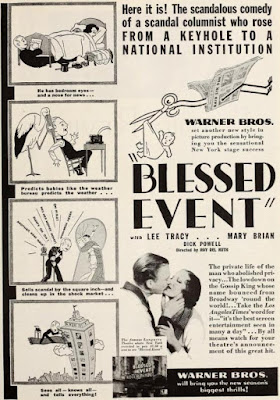 Fast talking and quick-thinking gossip columnist Alvin Roberts rises to the nadir of The Daily Express, sacrificing his own conscience for comeuppance. Director Roy Del Ruth allows Lee Tracy’s prestissimo verbiage to dominate the film and veteran DP Sol Polito just needs to point the camera and shoot in order to capture the barrage of banter in medium shot: the workmanlike compositions focus the film squarely upon our main characters like a Broadway performance or, more aptly, vaudeville verbosity!

Alvin Roberts (Lee Tracy) begins at the bottom and sinks even lower as his gossip column airs dirty laundry and moral misconducts of the rich, famous, chorus girl and gangster all with equitable impunity. Of course, he gets promoted! But Alvin’s crush Gladys (Mary Brian) in the news department doesn’t like the sleazeball he’s become at the expense of other people’s grief, and demands he give up his job...or her. Alvin’s nemesis is teen idol Bunny Harmon (Dick Powell, cute as a button) who trades public barbs with the rambunctious reporter and vows to keep him out of the new Jazz Club on opening night. The battle lines are drawn, though rather vaguely. It’s never quite explained why they don’t like each other, and Bunny is never shown doing anything but crooning his numbers and smiling a lot. The conflict is just a MacGuffin to set up the third act. Meanwhile, Alvin publishes premarital consequences and naughty nuptials without regard to those hurt, rationalizing his Yellow Journalism as only taking advantage of what other newspapers would print anyway. His cohort George Moxley (Ned Sparks) loses his column to this muckraker and one of his four humors in this humorous affair. Ned Sparks enriches every scene with his stone-faced droll delivery, whether it be strident or subdued. Alvin’s secretary Miss Stevens (Ruth Donelly) holds her own against his pleonastic rhetoric and even incidentally steals a misplaced kiss from him between doors and doesn’t bat an eyelash.

So, we get to see a policeman slap around a handcuffed suspect with nary a condemning word, Alvin’s mother says “Well I’ll be damned” just before a fade to black transition, multiple instances of cheating husbands and pregnant mistresses, a step-by-step description of Ruth Snyder’s death by Electric Chair in a nice piece of blackmail by our protagonist and the grand finale of a pregnant chorus girl getting away with murder, with a cop as eyewitness no less! The power of the Fourth Estate saving the intestate! Depression era shenanigans at their best!