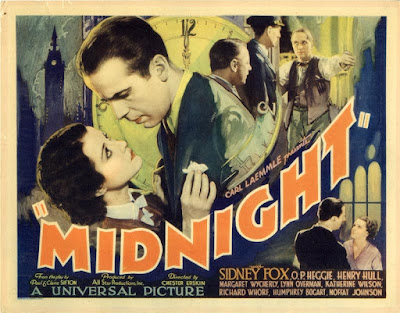 Jury Foreperson Edward Weldon’s sense of Justice is carved in immutable stone, much like Hammurabi’s Code, but whose own adherence to the Rule of Law is as passive as his entitlement. He’s willing to take another’s eye or tooth while his daughter's remains intact. Chester Erskine directs this “Poverty Row” morality tale with tight framing and stagey blocking which reveals its limited budget, eschewing transitions or establishing shots and relying on solid acting, wonderful match-cuts and interesting compositions to stage this talky affair. The story stretches credibility, and its contrived plot is engineered to exploit the underlying moral conundrum of the central character yet holds our attention as the suspense builds ampere by ampere to its shocking climax. This was re-titled CALL IT MURDER upon its re-release 1947 to promote star Humphrey Bogart, whose role is billed eighth in the original credits! However, Pre-Code sensibilities of premarital sex, murder, executions and the unprosecuted guilty haunt the stark narrative, as the very tale itself would need its ghosts exorcised to appease the Hays Code!

The plot is a reverse 12 ANGRY MEN: Mr. Weldon’s role as head of a jury, who asks a pointed question of the accused murderer Ethel Saxon during her testimony: “Did she take the money?” She proclaims the murder as a crime of passion but her positive assertion of absconding with the money leads Weldon in convincing the rest of the jury of her guilt for First Degree Murder and, by obligation, her death by electric chair. Edward Weldon (O.P. Heggie) suffers little concern over her fate as he’s only applying the law as written by statute. As the story progresses, he becomes a recalcitrant celebrity whose jury question not only convicted the defendant but propelled the prosecuting District Attorney towards potential Governorhood. As the midnight hour of her execution ticks closer, his anxiousness and nervous behavior is contrasted with Ms. Saxon’s, whose dark-circled eyes already seem to stare into oblivion. A journalist slithers his way into the Weldon household for an inside scoop to witness his potential breakdown. Tangentially, Weldon’s adorable daughter Stella (Sidney Fox) is dating slimy dude by the unfortunate name of Gar Boni (I urge you to look this up in the Urban Dictionary) played by the now legendary Humphrey Bogart. The nexus of this night brings together Saxon’s execution at midnight and his own daughter’s crime of murdering her gangland lover. The moral dilemma becomes in Weldon’s acceptance of the Rule of Law’s equity: should his daughter be sent to the electric chair too? Can human behavior always be explained by mere Actus Reus? Isn’t Mens Rea an element too? The denouement involves the District Attorney devising his own narrative to save the waifish Stella even though Weldon wants the exact truth to be told, and Stella confesses to the murder. But law applied unfairly to those entitled to preferential treatment is Fascism, and the film seems to support this claim. Her preemptive Nolle Pros weighs heavily on the viewer’s mind after poor Ethel Saxon was murdered by the State for a similar passionate crime. The film smartly doesn’t include a coda and remains ambiguous in its judgment, ending with the bored looking journalist, who witnessed everything, leaning against the doorframe. Will he write about this miscarriage of Justice? Or will his headline underwrite the DA’s sordid story?

O.P. Heggie is excellent as the rumpled patriarch filled with the nervous energy of the Righteous, angry at feeling shame for carrying out his civic duty. He comes across as a decent man, yet one confused by his own ethics, unable to accept that human behavior is sometimes unquantifiable. He may see the world as black and white, but his world is only white. Sidney Fox is cute as a button and portrays Stella with naïve charm, a good girl who falls for a bad guy. Bogart as Gar Boni actually smiles and laughs in the First Act but when he admits he has a few “birds” in his car while kissing Stella goodbye, the lump she feels is only his Smith and Wesson!

The film is beautifully photographed with claustrophobic framing and deep focus, and obviously Director Charles Erskine didn’t have extra film to waist for coverage: much of the dialogue is spoken in two-shot or close-up. He and DPs William O. Steiner and George Webber also use reflections to create interesting compositions that minimize editing and waste of film stock. Leo Zochling’s use of match-cuts creates tension and conjunction, such as a pacing Ethel Saxon behind bars cut/to Edward Weldon pacing behind a stair banister, or a dolly in for close-up on a policeman dissolves to the guard at her jail door. The best may be an over-the-shoulder shot of Weldon berating his daughter that cuts to the same shot of a Priest reading the last Rights to the convicted. Lithe camerawork that follows a slow head-turn or short nervous tracking shot of pacing feet imbue this film with a creative impulse often lacking in the most expensive feature films!