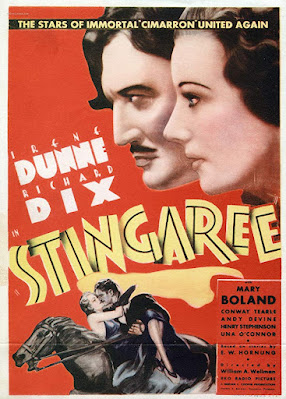 A fairy tale concerning a young woman who goes from an Australian sheep farm to the Paris Opera, and an outlaw who goes from the Australian outback to a Melbourne cage. William Wellman has directed some great films, but this ain't one of ‘em. The film plods along for its 77-minute runtime as even its opening scene is too talky, blandly introducing the main characters with some trite and unfunny conversations. Wellman’s films are often tough, gritty, and anchored in a violent realism, but this star-studded fantasy is as weightless as a photon...and just as electrifying.

Hilda (Irene Dunne) is a poor servant girl whose soprano transcends her mistress's chirping nonsense and is soon kidnapped by the swashbuckling Stingaree (Richard Dix), who sacrifices himself for her audition! Incarcerated, she travels the world becoming an Opera sensation yet her wounded heart still yearns for his captured corpus. But Wellman can’t decide if this film is a screwball comedy, melodrama, musical, or adventure so he tries to mash it all together into one big confection. The two stars share little chemistry onscreen, and their romance seems a bad fiction by bored writers, as Stingaree professes his love with patriarchal authority and hers with submissive compliance: it’s too convenient and forced.  The bright spots to this tarnished affair are Andy Devine as the titular rogue’s sidekick Howie, who sputters in disbelief and anxiousness under pressure but is always loyal. Also, Una O’Connor as the housemaid Annie is a firecracker, muttering witticisms and criticism about her smarmy mistress under her breath, her expressions and body language often communicating more than a spoken word. The music by legendary Max Steiner is forgettable and repetitive, and what was hilarious once becomes rather annoying for the third and fourth time! Even the great DP James Van Trees seems to dial-it-in here, with bad back-projection and lazy camerawork that fails to add flavor to this vanilla narrative. STINGAREE is a stinkaroo.