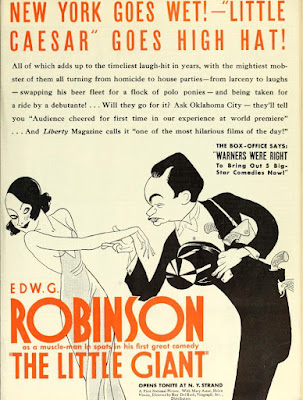 You can take Bugs out of Chicago, but you can't’ take Chicago outta Bugs! Edward G. Robinson is Bugs Ahearn, recently unemployed bootlegger from the Windy City who decides to take his tax-free million dollars and move up in the world...or at least society. A street-smart tough guy whose language and mannerisms are as unrefined as the gutters he crawled out from, Bugs gives up his criminal ways (thanks to FDR) and attempts to go straight. See, he’s been reading Pluto’s books! Ha!

Director Roy Del Ruth propels the narrative with wisecracking rapid-fire dialogue as Bugs delivers his own verdict to peers and rivals alike. He’s sincere and not out for an angle but gets swindled by high society low-lifes in California (which is in Texas, according to his cronies!). Bugs even pays off his moll with both money and kindness and keeps his childhood sidekick around if he really tries to better himself. DP Sidney Hickox sets the right somber tone after the initial election montage with extreme close-ups of tough cigar chomping men, who listen to the disheartening news. The compositions visually balance what at first seems like another violent gangster flick which is soon upset by Bugs’ raucous and hilarious diatribes. It’s a neat trick for an audience expecting LITTLE CAESAR!

We see Bugs struggle to choose the right clothes at the right time, uncomfortably mingle with the Santa Barbara aristocracy, attempt to learn and play polo and get blinded and swindled by love. The ultimate gangster becomes victim...but not for long. He’s even conned by his lovely benefactor but no worries, she’s been victimized by the same crass upper-class caste! So, Bugs gets his gang together for one last fling as they try to save his failing Savings & Loan he was tricked into purchasing for six hundred thousands bucks. He sure gets more than his money’s worth!

Funny and cartoonishly violent, this film is both a parody of the genre and a solid entry. It can laugh at itself and not take itself very seriously and yet carve out interesting characters to tell a rather touching love story. The cast is excellent from Edward G. Robinson’s grimacing countenance and guttural mangling of the English language to the intelligent and beautiful Mary Astor as his “secretary” and Helen Vinson as the disingenuous femme fatale. Finally, his beer buddies finally enjoy a game of Polo, not with mallets but hot lead!