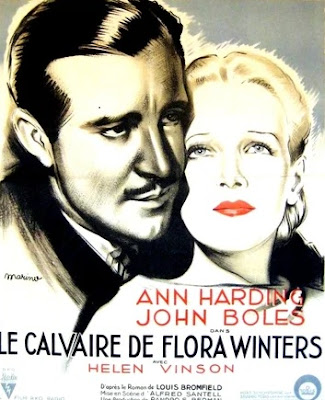 Vergie suffers through her Winters of discontent, mistress to an ethereal love grasped temporarily, her life dedicated to another’s achievements. Director Alfred Santell tells another version of BACK STREET and FORBIDDEN but Ann Harding as the titular victim breathes fierce life into the often-trite melodrama while John Boles as John Shadwell, the married and upwardly mobile Politician (her One True Love!) imbues his character with the requisite good intentions and deprecating charm.

Plot: Vergie is an independent businesswoman whose father was paid-off to arrange the breakup between Vergie and Shadwell by insinuating she was pregnant to another man. Shadwell leaves her and marries into a wealthy family which is a stepping-stone for his own ambitious career. Small town gossip and rumors spread like Covid (to the same disastrous effects) and soon Shadwell and Vergie are having an affair when he learns the truth about the lie. But Vergie is supportive and sacrifices her happiness and their forbidden child upon the alter of John Shadwell. She also offers her own freedom to save his reputation (and her daughter’s!) after his tragic murder, committed by the jealous wife who stalks him to Vergie’s boudoir. Though the plot reads like a mundane psychodrama the film’s structure tries to frame the narrative in an interesting pattern: it begins with Shadwell’s funeral as we’re introduced to characters (without context, that’s revealed in the next two acts) who cackle and chatter about his life and death. Then we get a reverse shot of the procession from inside a second story jail cell with the beautiful Anne Harding slumped against the window. Reverse-shot to her framed in the window gripping the steel bars: it’s a nice composition that is reminiscent of Robert Bresson, decades later! Then the body of the film is told in flashback beginning 22 or so years prior to the present date of 1934. Strangely enough, decades pass, the child grows to womanhood, yet Anne Harding doesn’t age! It’s not until the denouement that we see her truly withered and unkempt, like an older woman whose hope has receded like a deluge.

Harding’s performance isn’t as breathy and over-dramatic as some of her other roles; she plays it more restrained which makes it more sympathetic. She’s a survivor more than a victim of circumstance, a business owner who relies on herself and not a man for her daily sustenance. There is no weekly allowance from her lover: she is financially independent which makes for a refreshing Pre-Code character! Thankfully for Vergie, she suffers unjust conviction and incarceration for only a year until the guilty wife makes a deathbed confession. She is reunited with her daughter who now knows the truth. It’s a real tearjerker.