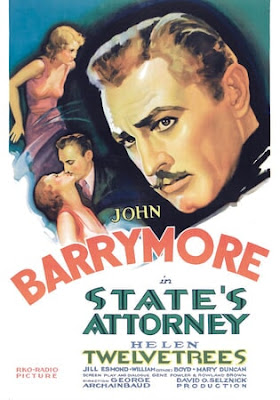 Prosecutor and Prostituter shack up together until the Governorship is about to set sail; fearing a tempest, the elected DA marries for social standing and not the recumbent kind.  Director George Archainbaud allows John to go full Barrymore as the alcoholic and womanizing attorney, yet his antics are to good effect. After all, what is a criminal attorney’s strength but courtroom theatrics! The beautiful Helen Twelvetrees portrays the streetwalking June Perry, knocked down (not up, fortunately) but not out for the count; she’s a strong and resilient woman who may feel shame yet considers herself a survivor and not a victim of circumstances.

Tom Cardigan is a boozing criminal defense attorney for mob boss Vanny Powers. Vanny offers him five grand to go to Night Court to get one of his girls “off the hook” for ‘tapping on the window”. Tom isn’t interested until circumstances find Vanny at the court’s mercy after a speakeasy raid (Tom purposely fails to get the case thrown out) but lingers until June’s case is called to the docket. He feels empathy for her predicament and with charm and devilish wit convinces the judge (a woman, mind you) to acquit the girl. June is thankful and comes home with him for a drink…and makes him breakfast in the morning! Their romance seems genuine and rather touching as they bond in everything but holy matrimony. Tom is offered the chance at District Attorney at Vanny’s suggestion who wants to control him as Chief law Enforcement Officer of the city. Tom is elected and soon the Governorship calls, but he won’t prostitute himself to his one-time boss and decides to go the straight-and-narrow. Melodrama ensues.

I’ve worked in a District Attorney’s Office for 22+ years and have been part of over 100 jury trials in my career (not counting other proceedings!) and have never seen court as exciting and theatrical as this! Barrymore does more speechifying than questioning and the exasperated Judge and Defense attorney (not to mention witnesses) struggle to hold their own against his somber (not sober) verbiage. The Rules of Evidence may have been different in 1932 but not that different! Yet it’s enjoyable enough and presents the moral dilemma beyond a reasonable doubt which Tom accepts with head held high yet professionally laid low. Over-dramatic? Hell yes! But perfectly in character and with a lovely and surprising denouement.