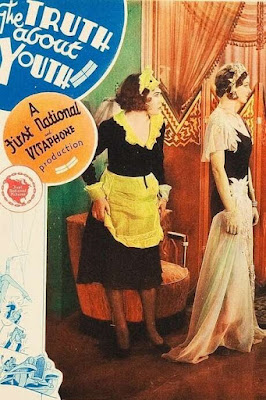 Phyllis is torn between two Dicks while Kara just can’t get enough! William Seiter’s early talky is a rather stodgy melodrama that sports budding performances by Loretta Young as Phyllis and Myrna Loy aka The Firefly/Kara, both of whom dominate every scene; one with precious naivete and the other with sultry sexual prowess.

Technically, the film is stiff and talky and instead of establishing shots William Seiter utilizes overlayed inter-titles to denote a change of location. DP Arthur Miller, who would in later years win the Academy Award three times (out of six nominations!), creates rather mundane compositions often with too much headroom. Also, Myrna Loy’s poor lip syncing during her nightclub songs is entirely distracting as she blows kisses while still singing! The film is also scored and not reliant on just diegetic music, but it’s a bit distracting in the many long talky scenes.

The story involves two Dicks: Widower Richard “Dick” Carewe (Conway Tearle) as the fatherly guardian who raises his best-friend’s son Richard “Dick” Dane (David Manners) after his buddy’s death, while simultaneously fostering Phyllis, the daughter of his housekeeper. Young Dick falls for the lip-syncing Kara, a gold-digging vamp whose persona is like a giant billboard advertising her sex. Old Dick wants Phyllis and the Imp (yes, that’s Young Dick’s sobriquet) to marry but Phyllis has the hots for her sexagenarian. A lustful quadrangle ensues with requisite turmoil. I’ll give the film credit in that the final resolution leads the viewer to believe that Imp, who married Kara out of lustful vigor, will lie to Phyllis and get to eat his cake and have it too, so to speak. Of course, a union based on deception is truly no happy ending. Yet Imp spills his guts (and loins) to Phyllis and ends up alone while she professes her love for the elder Dick! This ending could be unsettling as Phyllis is a teenager probably a good 40 years younger than Carewe, but she pursues him, and he is reticent to accept her affections. That he finally acquiesces and kisses her (shot reverse in a mirror) is unsurprising as Loretta Young is not only beautiful but imbues her character with a maturity and intelligence beyond her years! Carewe’s fuddy-duddy buddies get the final word about future quantity, and with a sigh signal their resignation. So, what is the truth about youth? Old and experienced guys are sexy? Youth is wasted on the young? Youth is fickle? Maybe all the above.