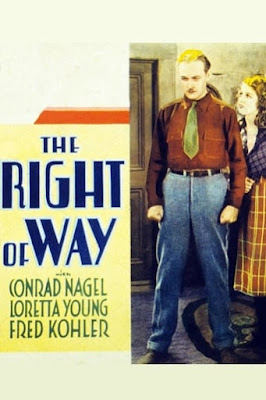 “Beauty” may think he’s made of Steele as he matches wit with the Crimes Code, but he falls like timber when confronted by a gaggle of pugnacious lumberjacks, plaid devils whose crude hands pass Divine judgment. Wow, what a strange sentence yet it reflects the very theme of this boorish and trite little film. Director Frank Lloyd allows the actors to portray emotions with “silent-film” histrionics and embellishments, the cadence of their language stilted with stiff delivery that would have sounded disingenuous on the stage! DP John Seitz is a legend yet here he seems merely workmanlike and bland in his compositions. But he sure knows how to photograph the 18-year-old Loretta Young who is the real beauty here; she’s like a breath of fresh air is this stodgy melodrama and makes every scene come alive, even though her French-Canadian accent is rather erratic. Ms. Young doesn’t appear until late in the Second Act, but her appearance is magical as she dominates the silver screen by mere presence alone, projecting such a genuine beauty that is more than superficial, empowered by the light of her very soul.

Well, the tedious tale concerns a truculent criminal defense attorney who gets the shit beat out of him then loses his memory, becomes a good guy and falls in love with Loretta Young but must face down his past when it comes flooding back to his mind. It starts promisingly enough as we see a close-up of hands full of nervous energy with a voice-over that’s smooth and confident: this is our main character “Beauty” Steele (Conrad Nagel who sports the worst mustache in film history) who is defending a lumberjack charged with murder. His competent and cultivated closing argument matched with his courtroom antics describing the limits of Circumstantial Evidence bring an acquittal for his client. When the shaggy-haired client thanks him for saving his life, Steele retorts “You’re guilty as Hell”. What a great opening! Then it all gets muddled and uninteresting as we focus upon Steele who is a true asshole to his wife and her brother with a street-corner reputation to match. And the dirt on his upper lip looks like a canker-sore and becomes distracting. When he’s beaten nearly to death and convalesces with the previously mentioned client 100 miles away in a remote village, we’re just not interested enough to figure out how the fuck he was transported while unconscious. The lumberjack rowed a hundred miles with him in the boat, I suppose. Then Loretta Young materializes like a mirage, an oasis to a thirsty audience, and dominates the film with her gentle allure. They fall in love, make vows, his memory comes back, he returns home to confront his past, his wife is remarried, he visits a priest who gives him the shittiest advice possible, then dies. Now Loretta Young is stuck betrothed to a creepy village elder with his passing. But Steele got right with god...and that must count for something, right?