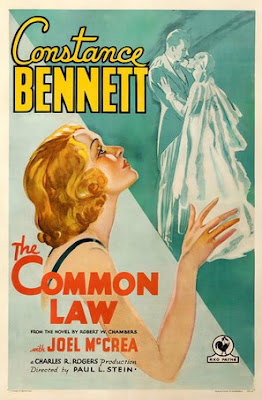 John Neville can’t stand the fact that Valerie, his current crush, has a bit of Dick in her past. It’s Ok for him to adorn his studio with naked and nubile artifice, exposing the double-standard of patriarchal monogamy. Paul Stein’s direction is mostly static and talky (as many early sound films are) and doesn’t come alive until the Ballroom sequence late in the second act after which it becomes rather dull and monotone once again. Constance Bennett is radiant as the love-lost girlfriend Valerie West, imbuing her character with a fierce independence yet she suffers the most because of it: it’s infuriating that she must acquiesce at the film’s conclusion to seek faux happiness. Joel McCrae as the painter John Neville isn’t a cruel man but falls into the typical pattern of male entitlement. He’s adoring one moment then, when he doesn’t get his way, angry and judgmental the next: he’s a little boy in a man’s body.

The film begins in Paris with Valerie packing her bags and exiting the life of her “boyfriend” Dick Carmedon who insists she stay because otherwise she would need to “work” to support herself: of course, ‘work” insinuating prostitution. But she’s already prostituting herself for room & board and has had enough so decides to set out on her own. She answers an ad for a nude model and soon falls in love with the artist. But Neville is a Black Sheep of a wealthy family and his bitchy sister Clare (Hedda Hopper) schemes to put an end to his social disgrace! Breakups and makes ups ensue until Valerie admits defeat and succumbs to the pressure of High-Society social mores. Though the theme of the film pushes against entrenched patriarchal values it surrenders at the climax, suggesting that the only way Valerie can be happy and safe from sexual exploitation is to be married and subordinate. She seems to embrace a feminist perspective yet is the one who cooks and cleans while they’re dating. Though she is a bit shy when first modeling in the buff, she quickly overcomes her fear and embraces her femininity as her naked body is captured beautifully on a large canvass, displayed to everyone because it’s Art. She may surrender at the end but doesn’t give herself away, either.

There are some great Pre-Code moments too, aside from the actual plot concerning pre-marital sex. The giant painting is often a focal point for DP Hal Mohr which depicts naked women frolicking beside a lake, nipples and all. We get a brief glimpse of Ms. Bennett in her silky underwear before she poses nude for the first time, as the camera draws slowly back into a long shot to reveal her lithe flesh barely concealed beneath a towel. Then we get the Ballroom sequence later in the film which is an orgy of uncensored Hollywood delights: women scantily clad, draped on a huge float as the revelers drink and thrash in delight! For the most part the compositions are formula and unexciting as the actors are specifically blocked (for sound, I presume). Hal Mohr would go on to multiple Academy Award nominations and victories, but you really couldn’t guess from the standard work seen here.

Overall, an unfulfilling melodrama where our heroine is eventually subsumed by expectation of authority. I suppose she and Neville will go and live independently together.