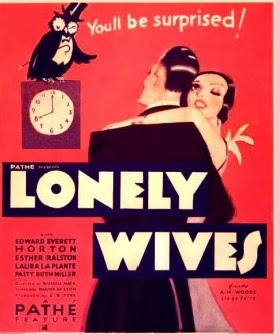 Renowned Criminal Defense attorney Dickie Smith is two-faced…literally! A comedy of moral errors, we are blessed with a dual performance by the wonderful Edward Everett Horton as both the amoral attorney and his goatee-less vaudeville mimic Felix, aka. The Great Zero. Horton dominates the film in these dual roles with fast talking quips and wide-eyed feigned virtuousness as the two trade places for an evening of infidelity (Dickie) and stage practice (Felix). Of course, it's not a comedy if everything works out as planned!

Dickie is all work and no play until the clock strikes 8:00 PM, then he transforms from a married man into a wolfish bachelor! But Dickie’s Mother-in-Law is staying with him while his wife is away and keeps a sharp eye on his evening extracurricular activities. When Felix appears and is a dead ringer (once the goatee is applied) for Dickie, they bargain an evening for Felix’s chance to mimic the famous attorney on stage. Hilarity ensues. From the opening scenes of the new secretary and her wiggle waggle to the Mother-in-Law’s dream of pitter-patter of tiny feet, Horton’s reactions and perturbations are perfectly timed comic genius. The entire cast is excellent as this well written script flows non-stop like a raging river of words with twists and turns that surprise the viewer expectations. What I found most interesting is that the script doesn’t “sell-out” Dickie’s wife as stupid or naïve, but more intelligent and scheming then her famous husband!

The story only has three set pieces: Dickie’s Den, his bedroom/sitting room and a brief affair in a restaurant. Director Russell Mack blocks the film well though it suffers from static compositions, a fault of the technology more than the DP’s skill in these early sound films. Yet DP Edward Snyder deftly uses split-screen to great effect when Horton appears in medium shot talking to his doppelganger: can you see the splice because it’s very well concealed!? Hell, even the eye-lines match! I’ve seen films made decades later that aren’t as skillfully done!  The title is a bit misleading as it places the moral blame on “lonely wives” who are taken advantage of by Dickie when he handles their Divorce proceedings: it is more aptly titled Conniving Husband.