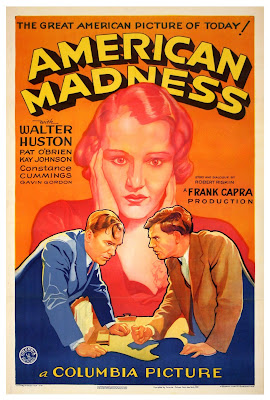 Tom Dickson’s Union National Bank Trust is run on trust and character, good old humanistic values that the Board of Directors seek to undermine. Frank Capra and his two legendary creative companions, screenwriter Robert Riskin and DP Joseph Walker piece together a taught 76-minute story with quicksilver overlapping dialogue, beautiful deep focus compositions and fluid tracking shots all edited together without an ounce of celluloid cellulite. Walter Huston as the forthright bank president Tom Dickson imbues his character with a genuine kindness and morality, a man who believes that the Depression can be overcome not by stockpiling money but in lending it to small businesses with only their word and reputation as collateral. This film seems a short version of Capra’s later classic IT’S A WONDERFUL LIFE (sans the supernatural elements) yet holds its own as a damn fine film itself and one that should be better remembered and regarded!

Well, this wouldn’t be a film without conflict and confrontation, so it soon develops that the Board of Director’s fears come true when the bank is burglarized, and rumor causes the customers to panic and withdrawn their savings. Short of cash and close to crash (this would have been raw in everyone’s memory in 1932) Dickson must rely on his own earned trust and reputation as the blue-collar businessmen he helped come to his financial rescue and delay catastrophe. Throw in some matrimonial melodrama (but not overcooked) and a cashier with gambling debts and we have the makings of a Greek Tragedy on ground consecrated by the almighty dollar.

AMERICAN MADNESS is a great film with excellent performances from everyone including a shout-out to Sterling Holloway in a small supporting role. Even the cops aren’t portrayed as bumbling idiots and actually figure things out rather quickly. Their interview techniques are unconstitutional by today’s legal standards yet probably realistic for its era. Tom Dickson is saved, not by an Angel of Mercy but very real people who respect him.