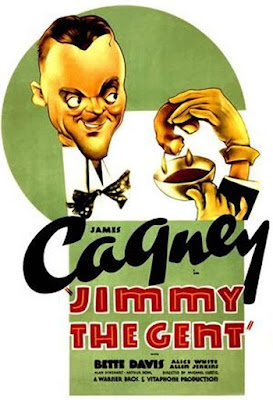 Jimmy Corrigan is a master of other people’s disasters but not so much his own. Michael Curtiz swiftly directs Cagney whose quicksilver tongue and jittery persona propel this story towards its morally neutral conclusion: Jimmy may force himself to become a teetotaler (however briefly) for love’s sake but he’ll just never be a gentleman!

The plot concerns the roguish Jimmy (Cagney) and his screwy racket of “finding” relatives of wealthy widowed and childless people who have recently kicked the bucket. His crew researches the decedent and convinces a mark to portray a long-lost cousin to collect the inheritance: he gets a 50% cut, of course! But he’s lost his love Joan Martin (Bette Davis) to his nemesis Charles Wallingham (Alan Dinehart) whose depravity is better hidden behind cultured manners and hoity-toity pinky-extended tea-drinking etiquette: they’re two different sides of the same coin...and the coin is the root of their moral bankruptcy. Jimmy is a mean and impulsive boss who berates his coworkers and pummels any mistake, a man whose monosyllabic shouting becomes annoying after the first act. Joan has a heart but its constantly in the wrong place, a woman whose moral compromise is negotiated in the final scene.

The plot swings between humor and humour, whimsy and violence and fails to depict any sympathetic character. Jimmy is an ass, his cohort Lou (Alan Jenkins) is a pushover, Wallingham is a jerk and Joan is just preyed upon by both men without a presence of her own. But Curtiz had some fun with this: he begins the film with stock footage of various disasters, screaming headlines and then a close-up of Cagney’s shaved head...from the back! Ha! Scars and all.