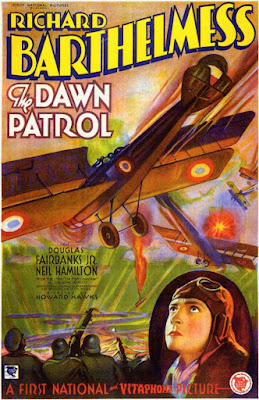 Soldier’s lives as temporary as chalk scrawled on a blackboard and the insanity of commanding young boys to their death. Howard Hawks first talking film is a bit heavy on the speechifying yet still retains a powerful insight into the bonds men form under fire both as compatriots and adversaries.

Richard Barthelmess is Courtney, a veteran pilot who erases men from the world one mission at a time. He demands more experienced pilots and better planes but his concerns depend upon the seemingly impotent command of Major Breck. But soon Courtney will discover what it’s like to be in someone else’s boots. Scott is another veteran Ace of the squadron and he and Courtney watch as boys earn their angel-wings, unprepared for these dangerous missions until Scott’s little brother is assigned to the squadron: Courtney, now a Major, must follow his orders and send him to certain death over Germany. Howard Hawks focuses upon the group dynamic and eschews any romantic subplot: this is about honor, courage (yes there’s an E in courageously) and patriotism. Though the film upholds these standards it does offer a critique of military incompetence as their equipment and training is so inferior to the German’s and nothing is done about it. The answer seems to be this: we’ll win by sheer numbers, sending boy after boy to doom. This differs from THE EAGLE AND THE HAWK (1931) because that film was concerned with one soldier’s dilemma and its crushing despair even though the plots are similar.

Hawks films some daring and nervous dogfights adding verisimilitude to the film: even the rear-projection (which had to be filmed too, of course) is extremely well done. Hawks doesn’t strictly romanticize the danger as the pilots are covered in oil and blood, screaming while they plummet to the ground or waive their finale salute in defeat. The miniature SPFX in the final bombing run are dramatically effectual and well integrated with live action as debris and shrapnel fill the air like daggers cutting down the German soldiers. Courtney saves the life of his friend or at least offers a brief respite from danger. Now Scott has rather large boots to fill.