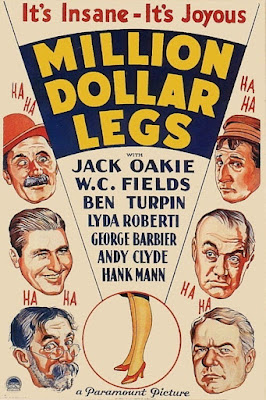 Klutzy Klopstokian Commander needs cash for the coffers or loses controlling interest in capitalist career. Alliteration aside, the President is convinced to enter his country Klopstokia in the 1932 Summer Olympic Games in Los Angeles in order to win enough money to cover his outstanding national debt. This goofy, immature and irreverent comedy makes little sense but isn’t meant to, as word-gags and slapstick often coexist with the same joke! This may have seemed more funny and comedically dangerous upon its initial release and now seems a bit bland (kinda Monty Python-light) yet made me smile through most of its rather short (64 minute) runtime.
W.C. Fields is the previously mentioned President who retains power by sheer physical strength: to usurp the presidency one must conquer him in a spontaneous wrestling match! Hugh Herbert is the Secretary of the Treasury who isn’t quite up to the challenge yet he should be commended for his consistency. Jack Okie is Mig Tweeny (??) the Fuller Brush salesman who is the focus of the story as he falls in love with the President’s daughter Angela (Susan Fleming). To win the hand of this specific Angela (since every woman in Klopstokia is named Angela) Mig must win the heart and respect of her father which he does by coming up with the idea of Olympic participation. Mig discovers that the simple folk of the country are actually excellent swimmers, runners and jumpers and through some vaudeville shenanigans elicits a few laughs. Then there’s the spy hired by the president’s cabinet to sabotage the “athletes” so they lose the games: Mata Machree (a volatile and sexually empowered Lyda Roberti). Her wiggly dance and fluttering eyelashes drive every man crazy as no man can resist her! Mig Tweeny is caught between her and Angela but is somehow able to resist her erotica. The final weight-lifting contest is a ton of laughs and W.C Fields wins the day…with a little help from his temper.
Final Grade: (C+)
Words Chosen by Alex DeLarge