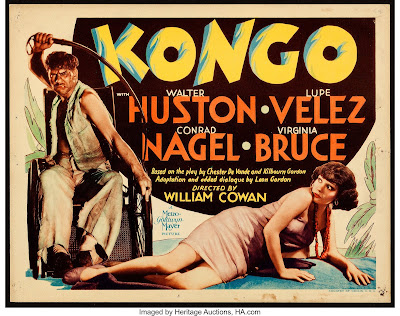 Flint is a man whose dark soul is made of quartz, an amoral prehistoric paraplegic that debases and abuses those around him: when struck, his spark ignites a flame that burns hot and bright with sadistic glee. Walter Huston as the tyrant Flint gives it his all, a 100% performance of sweating, sneering and jubilant shouting despicableness that becomes contagious to the supporting cast. This may be the most brutal, savage and emotionally corrupt film of the Pre-Code era that spares no character from abuse.

Flint is consumed by vengeance against Gregg, the man who stole his wife and crippled him 18 years ago. It’s not the damage to his body or masculinity that imbues him with hate: it’s the sneering image of his nemesis that holds dominion over his senses. So Flint captures Gregg’s infant daughter immediately after the affair, sees that she’s raised in a convent until adulthood then tricks her into tricks by becoming a prostitute until she is dragged to his compound deep within darkest Africa where he lords over the indigenous people. Ann is kept ignorant of her familial history and suffers ignobly, Flint the anti-Christ who turns her blood to brandy. A drug addled doctor stumbles into the story fleeing his own demons and felonies but soon finds salvation in the kind motherly hands of Ann. Together, they must escape the clutches of Flint who controls the native culture with mere magic tricks and simple illusions: he has become Chief of their religion which he weaponizes for his own cruelty.

The film is a product of its time (as all Art is, I suppose) and depends upon racist caricatures of the African natives as lesser beings easily deceived by the white man. Even the depiction of natives ingesting white powder (sugar) being the tool of submission is a not-too-subtle metaphor concerning the “whitewashing” or subsumption of their heritage. But the film also depicts the slave-owners, both Gregg and Flint (and their cohorts) as abominable “snowmen”, an unflattering mockery of white entitlement run amok. Flint’s inhuman sidekick is a violent chimp whose tendencies are chained to his master (though he gets the last laugh). There are shocking scenes of human sacrifice where a screaming woman is burned to death, feral sexuality, drunken moral squalor as the doctor writhes in pain and ecstasy amid a native orgy, the Doc submerged in a pool of leeches and Flint grunting his animalistic commands as a god-like wraith. He even undergoes surgery without anesthesia by chomping on a cigar: it’s the doctor who drinks the brandy!

Flint suffers the unkindest twist in the final act, both morally and physically, yet Walter Huston is able to impose a modicum of empathy towards his character. Ann and her good doctor transcend the light-at-the-end-of-the-tunnel by finding the very end of the tunnel but one wonders what shadows will be cast by secrets known...yet untold.