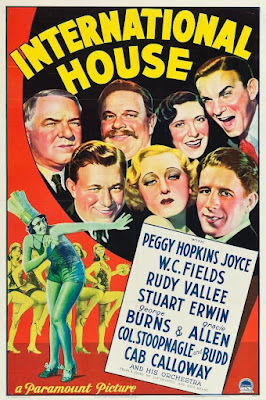 Dr. Wong invites an International cast of businessman to observe his Radioscope, a new invention that projects live-action in real-time: it’s a television without the need for a camera! Director A. Edward Sutherland and his legendary (once again!) DP Ernest Haller aren’t flashy or esoteric and just let the drunken and madcap follies unravel before their camera. The plot is minimal but the gags are maximized full-tilt, from Burns and Allen’s wonderfully sublime wordplay, Peggy Hopkins Joyce self-deprecating performance to W.C. Fields drunken soliloquies. Fuck the censors, this film satirizes and full-out “Pre-Codes” one of the great Pre-Codes in GRAND HOTEL.

Risque and often erotic, as we get to see Ms. Joyce in her stocking and garters, and even get a gag of body squeaks from a pussy, which she sits on accidentally, of course. Dr. Wong’s Radioscope depicts an erotic display of see-through costumes and full derrieres in a Busby Berkeley-like dance sequence with a bevy of beauties...and Sterling Holloway. Who doesn’t love Sterling Holloway?? We also get Cab Calloway and his band jiving to a frolicking number The Reefer Man (his bass player fucking rocks!) and we wonder how much grass was grazed by the musicians and cast! W.C. Fields also smoke a cigar from a hash-pipe and drinks a quadruple-shot of whiskey with just a hint of water. He also collects liquor like it’s going out of style but it is during Prohibition: I suppose it’s OK since the story is set in China, Ha! George Burns is the hotel doctor and Gracie Allen is his medical assistant and he often tag-teams conversations to save his own sanity or just to share the pain. And none other than Bela Lugosi shines as a comic villain who was once married to Ms. Hopkins and through subterfuge wants to gain the Radioscope and his prior paramour and murder any who stand in his way. He doesn’t count on the tiny automobile that races throughout the premises in the final act, as his ex escapes with her gyrocopting millionaire paramour and their litter of careless felines.

Repeating the plot and jokes doesn’t do the film justice as it needs to be experienced as a whole. Though W.C Fields doesn’t crash the party until the halfway point he’s like a tsunami of alcohol drowning all who get in his wake. And the straight couple who remain at the periphery of the story finally stand a chance of marriage...if their pilot can get up.

PS: And holy shit, Baby Rose Marie who sports the Louise Brook’s bob and sings jazz like a pro is the Rose Marie we know from the Dick Van Dyke show in the 60s!