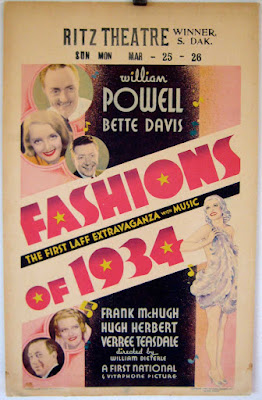 Nash is a likable and dashing Hood, a moral exile from Sherwood whose get-rich-quick schemes of forgery and blackmail may lead him to bankruptcy and prison...but never despair. The classy William Powell plays, well, a classy scoundrel named Sherwood Nash who counterfeits Paris fashions and makes a temporary fortune as both designer and exclusive seller. Powell plays Nash as a dashing and restlessly creative rogue who may be dishonest but never cruel: he makes the bad guys seem like the good guys. Of course those victimized by him, the other businessmen and Baroque, the world-renowned designer, are depicted as buffoons. A platinum wigged Bette Davis is Nash’s on-again/off-again artistic and gifted girlfriend Lynn who would rather him go mainstream than up the river, so to speak. Yet for all of the shenanigans of the absurd plot (it’s fun, but absurd) neither thinks of the bright idea of just going into business for themselves with their own designs. I mean, Lynn is shown to be quite creatively competent and her original designs fool the best critics in the world with a simple rubber stamp signature. Why not utilize her talent and go straight? Even the denouement fails to realize this as Lynn and Nash reconcile after another crazy idea is discarded overboard in a box full of worms.

Busy Berkeley directs two extravagant musical numbers set within the narrative. The first is the fashion review promoting and glamorizing Ostrich feathers (another scam) where the scantily-clad models prance about in feathery undergarments and platinum wigs. There is no fear in this graceful symmetry of long legs and buxom blondes who move like a fluid poem, or the women transformed into Harps (Harpies?) whose delicate chords are plucked and fingered. Berkeley depicts his signature visual style by shooting from extreme angles and in perfect synchronization and it’s beautiful. The audience within the film seems to watch this on a tiny stage but the impossibility of this epic musical being performed within these confines and the extreme point-of-view that is required by the film audience (us) makes it even more enjoyable. Another excellently designed number involves large portraits of historical figures painted on an opaque canvas that, when back-lighted, reveals a beautiful woman dressed in the period garb. The portrait is raised and the woman steps off the platform, as if ancient history were transformed into contemporary 1934 fashion. Very cool.

William Dieterle’s film is a fun romp even though Bette Davis is miscast (her role is to portray exasperation, not volatile independence which is her strength) and Nash’s pal Snap (Frank McHugh) is a feminists’ worst nightmare, a man who is much more creepy than funny.