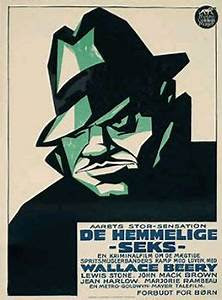 Louise earns his nickname Slaughterhouse, at first earning his pay by hard knocks (to the head of cattle) and then through hot lead (to his bootlegging cohorts). Seemingly above the law, a masked sextet of vigilantes work with law enforcement to return him to the abattoir where he belongs.

George Hill begins his film on location at the grimy stockyards as cattle are herded to their death at the blunt end of Louise’s sledgehammer. The camera pans up and focuses on two men practicing their deadly swings before their shift ends. Hill bookends the film with Louise waiting in his own stockade, not dissimilar to the terrified cattle, his bug-eyed look acknowledging his fate not at the end of a hammer but in an arc of electricity. In between, we are witness to the volatile rise of a blue-collar worker to bloodstained gangster; He’s a man who achieves his position not by brains but by pure animal instinct, a clawing, thrashing man whose baby-fat countenance is a masquerade for his psychotic impulses. It’s another wonderful performance by Wallace Beery who was born to play this type of role, the man who tries to fit into his $1000 suite but can never rise above the dirt under his fingernails or the “street” in his speech. He’s always one step behind on the insults but his retort is at the end of a revolver or his hammer-like fist. Louise attains his rank by following orders and instincts, as he answers to his boss Newton, the gang’s Defense Attorney. But there is little honor among thieves when self-preservation is at stake as it takes only one time for Newt to turn his back to his subordinate before suffering his brutish fate.

The film is titled after the cabal of masked men who band together to attain Federal and local arrest warrants for the gang but they appear in only two scenes. Even more strange, they don’t even exist until the end of the second act! The group is headed by the Police Chief who was fired by the Mayor after he (the Mayor) was elected by bribes and graft. Two reporters join forces with this sextet to bring down the Slaughterhouse: Carl (Clark Gable, wearing his perpetual boyish grin) and his buddy Hank, who falls in love with gangland moll Anne (Jean Harlow, adorable and precocious). But Anne isn’t all bad and tries to warn her lover Hank moments before he is gunned down on the subway. I’m not sure what’s more disturbing: the fact that Organized Crime is so prevalent or that some secret group can bypass Due Process to attain convictions. The end cannot justify the means as that way leads to a Fascist State. This film seems to promote this flawed morality without questioning its own corrupt and illegal tactics because, well, the Law is impotent to convict the “bad guys” when jurors can be bribed. But it’s only a goose-step away from good to worse in that “justice” system.