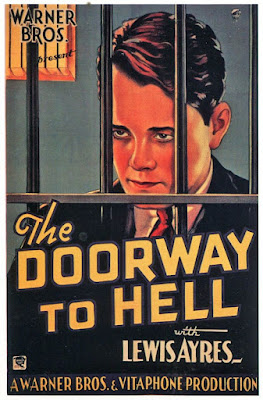 Louie believes war is a racket that can be exploited; a little (er) Napoleon who brings the prohibition gangs together for a brief respite until he walks through the hellish doorway towards his Waterloo sunset. Archie Mayo’s direction is competent but bound by early sound technology as the camera is mostly static and the characters need to deliver their dialogue in clear, distinctive voices without overlap. This is James Cagney’s second film (he’s sixth billed!) yet he steals every scene he’s in; his restless energy keeps him in motion even when he’s standing still! His fast-talking dialogue is almost too much to capture with this early technology. Lew Ayres is Louie the gangland leader and his good-looking innocence makes him difficult to accept as an intimidating mobster…until he tilts his chin downward and gives a vacant thousand-yard stare revealing a soul, dark as pitch. I wonder if Kubrick was influenced by this film in preparing the visual for his bratchny protagonist Alex DeLarge many years later.
Louie is a gangster who becomes mob-boss, at first by intimidation then by equal asset distribution among the many gangs who waste resources (and lives) as they battle the cops and themselves. The love of his life is his little brother who’s enrolled in a military academy and his fiancé who’s secretly enrolled in James Cagney! Louie wants to earn enough dough to quit the racket and take care of his family without fear of the electric chair as a future destination. But quitting isn’t so easy.  Even the honest cop, who doesn’t take bribes, shows his duplicitous morality by allowing the bootleggers to pass the final judgment that the law couldn’t enforce.
This is a violent Pre-Code flick and it wears its bloody heart on its sleeve from the opening scene: Louise takes his violin case and plays some heavy metal music (so to speak) by gunning down a rat on the steps of his apartment. This hit gives him the cachet to call together all of the gangland leaders for a meeting which is overseen by Mr. Browning,…machine gun, that is! Soon, the streets are peaceful as the gangs revel in their boosted profit margins and equitable treatment by the self-titled Bonaparte Boss. But Louise takes his money and “retires” to write his life story, from tenement rags to gin-running riches, with his lovely wife at his side and his brother safely embedded in military school. Turns out, he has one final chapter to write after all. When his compatriot Mileaway (Cagney) can’t convince him to return to the gang-life to restore order, a rival group attempts to kidnap his brother and blackmail him. But the little brother is killed in the attempt and forces Louise’s resurrection: not as leader but avenging angel. Damn, we get a brutal extreme low-angle shot of the child being dragged from beneath the axles of the truck that crushed him!
The final act is one of personal salvation and sacrifice as Louise brutally murders those responsible. Even the honest Detective knows he can’t hold a conviction on him (though he holds the clandestine affair over Mileaway), he allows the rival gangs to bust him out of stir so they can give him a taste of his own lead. As Louise is holed-up in a grungy apartment starring at a portrait of Napoleon In Exile, he knows his hours are numbered and options limited. He is never privileged to know that his pal Mileaway and wife are in love so he walks to his death, through the apartment doorway to hell, knowing he’s meeting it on his own fucking terms.
Final Grade: (B+)
Words Chosen by Alex DeLarge