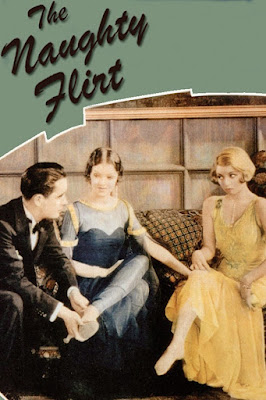 An attorney tries to lay down the law to the capricious daughter of his boss but her corpus keeps getting habeas-ed. This early talky is all fluff and feathers but is held together by the delicious Alice White, the wickedly severe Myrna Loy and the sternly handsome Paul Page: these three main ingredients make for a bubbly and nose-tickling concoction.

The setup was probably mundane even for 1930: Kay is a spoiled rich girl (never intentionally cruel, mind you. She says so herself) who falls for Alan, an attorney who coincidentally works for her father’s Law Firm. Her current beau Jack is scheming to marry her for her fortune with the help of his loyal and demanding sister Linda. Will Kay be tricked into unholy matrimony with Jack or will she give up her mischievous ways and discover true love with Alan?

The opening shot is of wailing sirens and a racing POV shot of a police car but we quickly discover this is no car chase: it a paddy wagon full of our drunken protagonists! Arrested for dancing provocatively, Kay and her allies are taken to Night Court to face a sentence of ten dollars or ten days. It’s there that she meets Alan and their relationship begins to blossom like a Venus Flytrap...and Alan is the fly! Her flirtatious car ride with Alan back to her father’s house is fucking hilarious and adorable as he can’t keep his eyes off of her no matter how hard he tries. The film also has no Establishing Shots and uses cue cards like a Silent Feature to delineate time and place. Their relationship is defined by a grudging respect and admiration yet it seems there’s nothing a good spanking won’t cure! Yes, in one scene Alan actually wrestles Kay over his knee and spanks her; this is the event that causes her to attempt change and go to work for her father...as Alan’s office clerk, of course. It’s degrading by contemporary standards and probably by 1930 social mores too. Though Alan shows no other signs of cruelty (he’s actually a good guy) it does show the patriarchal standard that defines the time. Trickery and subterfuge ensue but Kay finally objects to her vows at the alter in order to embrace that man she really loves.