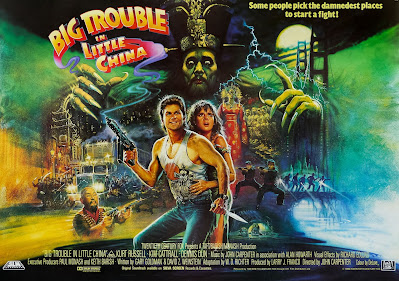 As Jack Burton hauls ass into the dark night, the Pork Chop Express plowing through the elemental maelstrom, he must heed his own advice: never drive faster than you can see. Director John Carpenter’s Saturday morning cartoon reverberates with thunder, blinds with lightning, and soaks the narrative in a fecund downpour. This cinematic dialecticism takes our bumbling hero Jack Burton, full of John Wayne bravado and pigheaded egocentrism, into a fantastic battle that reveals a deadly schism between his American values and Chinese Mysticism: a dark world of magic that transcends the limits of his experience…but whose empirical truth can’t be denied.

Jack and his friend Wang Chi must save two beautiful women from the nefarious clutches of an ancient spirit, a man cursed with living a ghost-life until he can discover a green-eyed woman who can tame his savage heart. The action is ripe with homage to the absurd martial arts film of the 1970s but enchantingly spiced with humor and flavored with mythology. Kurt Russell as Burton is hilariously rambunctious, rushing into situations that he can’t handle, while his sidekick Wang Chi (Dennis Dun) becomes the real action hero! Kim Cattrall as Gracie Law, a lawyer (of course) and one of the abducted women, is given a proactive role and not totally subjugated to hysterical eye candy. The set designs begin as mundane, from the interior of Jack’s Freightliner to Wang’s restaurant, but as the plot descends underground the diabolically detailed architecture embellishes the imagination: this contrast heightens the tension and builds a foundation of realism before joyously deconstructing it. John Carpenter’s synthesizer music is typical and adds little to the suspense but his pop dud at the end credits sounds like a crashed Coup de Ville: if only Ennio Morricone had scored the film!

Not to be taken seriously, this adventurous romp through the Five Hells and back again has all its heroes a bit scathed but successful, destroying the evil Lo Pan while finding love…though Jack decides his passion for the road outweighs his lust for the Law.