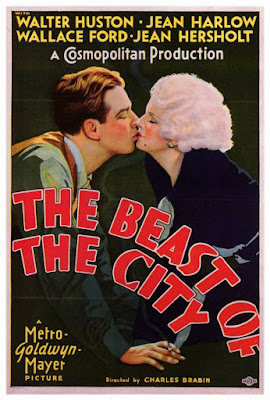 Despite President Hoover’s proclamation that precedes the film in which he states that we need the glorification of police and public support to stamp out excessive crime (RE-Bootleggers), I’m not sure which side is truly the City’s Beast! I mean, the film makes clear that Police Commissioner Jim Fitzpatrick (the indomitable Walter Huston) is such an honest and forthright hero yet he violates the very Constitution he has sworn to uphold. He reminds me of Cpt. Quinlan in Orson Welles’ classic TOUCH OF EVIL, the morally bankrupt policeman who only framed guilty suspects. In Welles’ film, the corrupt cop was the focus of our scorn, his Fascism worn on his sleeve like a scarlet swastika but here, the protagonist is portrayed as an All American Dictator to be adored for his sacrifice. Both would agree that the ends justify their means. I’d revise the title to a plurality.

The plot involves the hard-working American Jim Fitzpatrick earning his way to head of the New York City PD while his lazy brother attempts to ride his coattails. His sworn enemy is the Bootlegger Sam Belmonte whose rotund corpus is too often habeas-ed back to his Speakeasys and Gin-Mills. Jim’s brother Ed (Wallace Ford) needs more cash to entertain his platinum haired femme Daisy (Jean Harlow) so soon gets mixed up with Belmonte. The film focuses upon Jim and his family instead of exploiting the gangster’s high-roller lifestyle: we see an adorable interlude with Jim’s twin girls attempting to make edible pancakes (at least the dog likes ‘em) and his precocious son Mickey (yes, a very young Mickey Rooney!) while his adoring and spinsterish wife waits up for his return every night. Ed’s spiral to the dark side begins by pushing into Daisy and ends with pushing up daisies. She’s a shot of hot! Her alluring dance and admission of masochistic pleasure must have incensed censors! The cinematography is excellent as the camera often moves and tracks the action. DP Norbert Brodine also takes his camera to the streets of the city and films car chases and gunfights on location which is uncommon in this era of film-making.

This all ends in one of the most brutal shootouts in Pre-Code cinema! When Ed and his gangster cohorts are acquitted of the murder of a detective and a little girl during a Robbery (yes, it’s Pre-Fucking-Code as we see a child gunned down while crossing the street, and even see her in a pool of blood) Jim descends into his dark night of the soul. But with the help of a redeemed brother, wants to go all Dark Knight. He instigates a showdown between a dozen police and Belmonte's gang which ends in a point-blank gunfight: no one gets out alive. Daisy finally spills her guts, Belmonte and his slimy attorney are now mortuus est, and Jim and Ed makes amends of the permanent kind. We see the specter of Jim vowing to uphold his civic duty exposed upon their dying grasp yet the ghost of Despotism should haunt our collective consciousness.