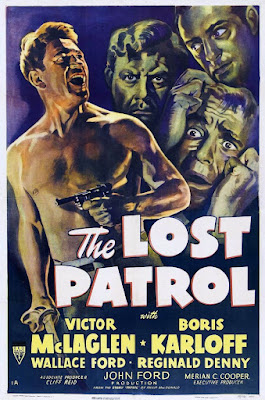 Twelve men subtracted from the world, their tomb the searing desert sands punctuated by gleaming silver swords. The Sergeant stands vigil over the graves, his machine-gun etiquette welcoming his tormentors with fierce determination. John Ford’s film is claustrophobic and intense even though it’s shot mostly outdoors in the raging desert heat: the crowded medium shots of men and their horses staggering without water, the sweaty close-up of men as they reminisce about better times create as sense of comradery and encroaching anxiety as if the very desert itself has become a living breathing entity ready to consume them.

The nameless Sergeant leads his men through the vast desert without destination or objective after their scout is killed by a sniper. The next 73 minutes is pure paranoia and stress as the snipers, like desert ghosts unseen, execute the men one by one which diminishes their resolve like water evaporating before a thirsty man. The group stumbles upon an oasis where they make their last stand against the invisible enemy whose only pronouncements are made by lead and written with in blood. When a British pilot lands amid the chaos he too is shot dead by the snipers (hence the twelfth corpse) yet his bi-plane’s machine-gun becomes a sudden hope for survival. But the men have become victims of stress and delusions, pierced by bullets: raging into the dunes with feverish madness or hiding behind the word of a dead god, all are cut-down and then buried by their Commander. The sergeant sets the plane alight and it acts like a beacon for another British patrol who comes much too late, as he must deliver one final condemnation to the enemy: with vicious machine-gun fire he kills the six who stalked him, thinking him dead. The cavalry is late and demands to know where his men are. The Sergeant points towards the swords embedded point-down that gleam like crosses reflecting their bright shining souls.

The cast is excellent but especially the three main actors: Victor McLaglen (Sergeant), Boris Karloff (Sanders, the Chaplain) and Wallace Ford (Morelli, one of the last survivors). Though Karloff veers close to exaggeration he imbues his character with outrageous religious fervor that is quite unsettling. McLaglen is a commanding presence but not domineering, a man who slowly loses control of the situation yet never makes blundering decisions. The DP Harold Wenstrom should also be commended as he shot much of the film on location in the desert and this adds the verisimilitude to the film that gives it extra gravitas! The DVD print doesn’t do justice to his use of framing and focus as this needs a new restoration! The score is the weakest part of the film as its omnipresence is intrusive and annoying; every scene is slathered with sounds from the jaunty saunter of the horses to the clashing desperation of the soldiers. This would have been a much better film if the score allowed the ghostly desert winds and swaying palm trees to add to the suspense.