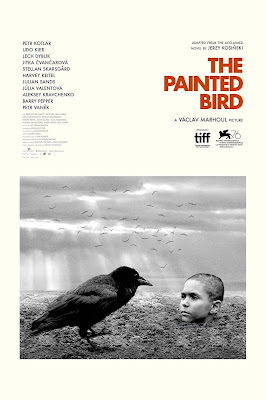 A mute testimony to a lost childhood subsumed by the sadism and despair of racism, an internal war much more personal than the raging conflict between nations. Director Vaclav Marhoul’s intentions may have been to eclipse the brutal realism of Klimov’s epic COME AND SEE (Hell, he even uses Aleksei Kravchenko!) or transcend the hardened beauty of Tarkovsky’s IVAN’S CHILDHOOD, yet Marhoul’s film falls rather flat in its presentation lacking the violent poetry of either film. Here, the violence is the message without context as our young protagonist becomes a cipher, a mannequin through which we experience the film from his perspective. Now, this may be the specific point of the film but the violence and cruelty soon become so over-the-top as to veer close to parody. Told in vignettes, the chapters are titled after the person/s the child will next encounter and each scenario descends into abuse and atrocity, some directed towards him but all witnessed by him. But the chapters feel staged and hackneyed, made to shock without suspense which diminishes the horror. My criticism is not of its bleak tone, I embrace Art that looks into the abyss of (in)human nature, but in its execution: Marhoul attempts to replicate the intellectual detachment of Michael Haneke (even choosing to mimic the look of THE WHITE RIBBON) but lacks his vision in comparative ethics and social conflict.

The film is photographed by Vladimir Smutny in a wonderfully contrasted Black and White, utilizing deep shadow and low angle occasionally to a classic Film Noir effect. His compositions don’t stand out yet fit the story with a workmanlike professionalism, which allows the film a historical gravitas and documentary feel, at times. Petr Kotlar is the young boy who remains nameless until the final scene: he gives a restrained performance that makes empathy difficult, speaking only a handful of words and wearing the same expression throughout his abuse. Contrast his performance with Kravchenko in Klimov’s classic and you’ll see quite the difference: Flyora is a child with childlike impulses who agonizingly suffers a fiery baptism into insanity, yet chooses to retain his core humanity in the final reel. Here, Joska is one-dimensional and static as his character arc is from walking from one point to another without change. This isn’t the child actor’s fault; it falls squarely on the Director. We then get a few well-intentioned famous cameos but the actors exceed their parts and break the illusion. Do we really need Barry Pepper to meta-mimic his character from SAVING PRIVATE RYAN? Also, the blocking feels too staged and counterfeit, like people posed for a reenactment of an event rather than natural movement. Of course, the Art of cinematic lies at 24fps is in making the faux seem for-real but here we can often see through the illusion. Marhoul should have studied Bela Tarr, Pasolini or Bresson to create a lived-in reality for our protagonist.

I can still find enough that I admire to recommend this film but there are many similar films that are better handled and more introspective, a few of which I mention in my opening paragraph. I would also mention Haneke’s TIME OF THE WOLF as it’s another apocalypse suffered from a child’s point-of-view with chilling results. The ending of THE PAINTED BIRD is both hopeful and hackneyed, one I wanted to like more than I did and found rather indifferent.