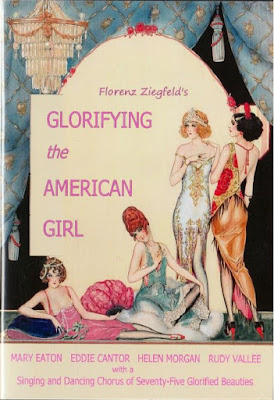 More like Objectifying the American Girl, this early “100% all talking” musical is mostly a static documentary of vaudeville and the Ziegfeld Follies interlaced with a boorish melodrama whose resolution makes no dramatic sense. It’s interesting as a time capsule as it captures some great performances and lavish musical numbers in two-strip technicolor without utilizing standard editing or camera techniques: we see some long-shots of the live performances without quick-editing or cuts to close-up.

The story concerns Gloria’s quest for stardom, urged on by her passive-aggressive mother at the expense of her sweetheart Buddy and their gal-pal Barbara. As Gloria prostitutes her talent to the vaudevillian villain Danny who paws and gropes his way closer to her breast, she is discovered by a talent scout for Ziegfeld and it’s back to the Big Apple...with the worm Danny signed to 50% profit sharing. The acting is sub-par and more expressive of the Silent era from which the format has just begun to emerge and the narrative trite and juvenile. Of course Gloria gets glorified and Barbara gets concussed but it’s all a happy ending (I guess) as it resolves suddenly and without a coda. As the film dances towards its curtain call, Barbara is run over by a taxi when abandoned by Buddy (wow, what a buddy, right?) at the train station when Gloria arrives back in town. She’s on her deathbed one moment asking for Buddy and the next they’re married, Gloria is pirouetting and prancing on the stage in goofy gowns, and the final curtain drops and exclaims its final credit. How did Barbara recover so quickly? Is she brain damaged? Will Gloria be stuck with the patronizing Danny? Was the performance a hit? Who the fuck knows and the film could care less, I suppose.

What makes the film most interesting is in the style and skill of the performances. Mary Eaton as Gloria actually tap dances and ballets like a professional and she has the thighs to prove it! Her leg strength is incredible and obvious as she dances mostly in short skimpy outfits. The final stage performances are endowed with well endowed women and men who revel all natural. Fig leaves, feathers and butterfly wings are Technicolor ingredients for this promiscuous potpourri panoply. Throw in some slapstick theater and some musical interludes and one has a movie! We also get a few swear words as mother damns her glasses and the vaudeville actors get to damn their stooge. All in all, a mostly fun romp back into 1929 that’s worth your time especially if you can see the color print on a big screen.