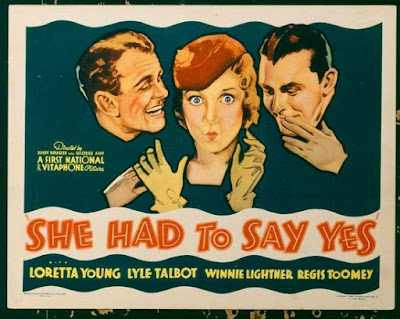 Flo may be chaste but is chastised and subjugated by every man involved in her life. This is Busby Berkeley’s directorial debut but this isn’t a musical as his fingerprints (or footprints, know what I mean?) are all over this one! But this may be the most patronizing and demeaning Pre-Code contrivance as the title implies. The resolution should leave you angry and spiteful and realize it ain’t no happy ending.

Flo is dating her boss Tommy who is a manager in a clothing company. Their secretive rendezvous in an “out of order” phone booth in the first scene tells much without needing dialogue. To boost sales, Tommy convinces the secretary staff to prostitute themselves to visiting businessman so the company can close the deals (but the women can’t close their legs). Of course, Flo volunteers so Tommy can get credit for the transaction, so to speak. The story devolves into cheating and jealousy and Flo, who remains a paragon of virtue throughout the story, is treated like garbage. Every man in this film is an entitled asshole. Even her initial love interest Tommy has the charm of a department store mannequin and just as many facial expressions. Danny is the businessman who paws and gropes his way to her heart (by way of her breasts) and is both protector of her “property”...and master. It’s disgusting. Yet Loretta Young as Flo is adorable, sympathetic and independent, a spitfire who puts each man in their place until surrendering at the very end: the tone of her voice implies protest, at least.

Busby Berkeley’s direction is wonderful. The opening montage is choreographed like one of his musical numbers as the sewing machines, costume designs and leggy models move in syncopation with the score. It’s very cool and a great opening! A few other scenes surprise too. When the secretaries decide to participate in the extra-credit, Berkeley takes his camera into the office and we see the women sitting on their desks, legs crossed, skirts short! Another scene shows a secretary being introduced by her derriere. Strangely, Berkeley crosses-the-axis in a rather mundane scene with Tommy standing over Flo as she is filing something away and is crouched low. We see them speaking in medium shot then he cuts 180 degrees and it’s jarring for no apparent reason. I’m surprised it got past the editor (who was also co-director!). Then he films a low-angle scene as Loretta Young remains seated and her big boss speaks with her: the angle captures her exposed legs and delicate form yet the person speaking has his head cut-off out of frame! I really loved much of the style of this film and it’s refreshing to see some artistry and not just mere competence. It’s the film’s morality that I despise.

The final scene as Tommy and Dan brawl over their perception of Flo’s goodwill is enraging. Both men are complete fucking jerks. When Dan apologizes (moments after attempting to Rape her...again) she grudgingly acquiesces to his embrace. I see Flo as having very few options and in her acceptance of Dan’s love she actually says “I suppose it’s the lesser of two evils”. I hope this film was meant as a bitter and caustic view on the contemporary Depression-era patriarchal mentality but it also objectifies every women. The schizophrenic nature leads to a possible reading either way but, because of Flo’s last words, I interpret this as a tragedy.