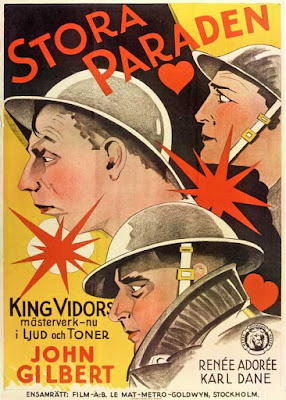 The big parade of jingoistic speeches, marches and banners returns with the big parade of mournful tributes, ambulances and hearses. King Vidor’s melodramatic excoriation of The Great War frames the story in threes: a triangle between Jimmy and the two women he loves and the triptych of soldiers, Jimmy and his buddies Bull and Slim, as they stride through mud, blood, and guts without glory in their dark nights of the soul and soil. Vidor doesn’t make a political statement about the war, he makes a personal one, telling the story from the point-of-view of three disparate American citizens: Jimmy the Rich Kid, Slim the hard-working poorly-educated Southern Riveter and Bull the tough-as-nails Bronx Bartender. Strangers before the war, three men unearthed from different social strata, they now make strange bedfellows. The film doesn’t ask questions about the War’s justifications: it answers the violent equation with a grotesque mathematics.

The first half of the film is strictly melodrama, depicting Jimmy and his tempestuous relationship with his wealthy father and his hard-working brother. His fiancée Justyn urges him to enlist once war is declared because he’ll look handsome in an officer’s uniform. His father’s reaction from disgust to overwhelming joy fills Jimmy with pride so he’s off to France to fight the good fight. Slim and Bull are briefly shown in their working environment but Jimmy is the focus here: his tragedy is collectively our tragedy. Once in Europe, they are far from the Front, billeted at a French farmhouse where the beautiful Melisande and her family live. The film still encourages humor and playfulness as all three men vie for her affections (to the point of practically sexually assaulting her) but she stoically rebuffs their military advances. Vidor has us feeling comfortable in accepting the tropes of melodrama and comedy before unleashing the fucking horrors of Hell upon us. We the audience feel the boundary of our sanity broken like the characters themselves, living a common life one moment the thrust into abject violence and mayhem the next.

Now the film comes alive in its depiction of death. The first great scene is here: as Jimmy and his cohorts are trucked away to the front, Melisande rushes into the traffic looking for her paramour. Vidor frames her in medium shot as hundreds of soldiers and trucks whiz by her, some of the men grabbing and kissing her while she fends them off. The action and speed of the convoy as she’s caught between the marching soldiers and the trucks blurring both the foreground and the background while Vidor pulls focus upon her despair is truly breathtaking. This isn’t rear-projection. There must be a thousand extras and thirty trucks in this scene alone! This leads to the men being dumped off miles away with orders to fix bayonets. Two scenes are brilliant here: one is the long column of men who march down a muddy road to be gunned down by a German aircraft. Jimmy now has his first taste of mortality as dying men writhe in the mud, as he’s ordered to march ever onward. Once they reach a forest they must continue their advance without stopping as men continue to fall from sniper fire. Vidor films in medium long-shot with deep focus so we see our three protagonists in the center of the frame yet can witness men being shot and dying, one by one in the background, as they advance towards the sniper. Like a deadly obstacle course, the men face snipers, then rifle fire, followed by blistering machine guns that mow men down like blades of grass, before ending with the concussion of artillery batteries that pin them down in an open field. Filming in extreme long shot from a high angle, Vidor depicts this hellish imagery utilizing hundreds of soldiers and huge explosions, dirt and human detritus raining down upon them like Armageddon. Mustard gas is the least of their worries. Now the laughing has stopped. Now the melodrama is forgotten amid these moments of pure survival. Life is no longer to be lived but endured.

Jimmy eventually survives while his friend’s remains are forever interred on French soil, his own leg shot apart and left behind. In one interesting visual call-back, we’re reminded of Melisande’s last contact with Jimmy as he throws her his dog-tags and a shoe (of all things, seemed strange right?) yet when they finally embrace in the coda we know he’s walking with a prosthetic as his left leg was amputated. Good thing he didn’t throw her both shoes, or his helmet! So Jimmy finds his one true love, his fiancé finds hers, and it may be a happy reunion but one bitter with the aftertaste of war.